The Year of the Dog may not be known for being the most auspicious, but for China’s local, renminbi-denominated bond market it may prove momentous. I see two likely drivers of increased foreign investment as the government continues to lower the barriers to entry.

In a low-growth world, global investors continue to look for yield. Chinese government bonds might be one answer, potentially providing both nominal and real yields on the attractive end of the range when compared to other investment grade emerging market countries across the world. Likewise, returns in local-currency terms have a low correlation (near 0.1 for 5- and 10-year trailing data) to that of developed and emerging government bond returns.

From a broader perspective, bond markets typically perform well when growth is decelerating, which has been the gradual trend in China in recent years as the Chinese government attempts to rein in unproductive excess industrial capacity. Sovereign risks are mitigated to some degree by the very large domestic savings pool and the country’s trade surplus.

Chinese government bonds are certainly not a riskless proposition. The country’s aspirations of managing down its large debt stock as a proportion of GDP may prove challenging if debt growth and economic growth do not progress as desired. As with many emerging economies, there are many risks, and investors should be mindful of a potential reversal of recent looser capital controls if Chinese authorities see the risk of foreign investor outflows as unacceptably destabilizing.

The other significant catalyst for foreign investment comes from the forthcoming inclusion of China into major bond market indices. China’s inclusion will likely follow a phased-in approach that could begin as soon as late 2018. Once implemented, we could see upwards of $250 billion in passive investor bond market inflows by some estimates, and potentially much more over time from discretionary investors.

Benchmark-aware active managers will not be able to ignore the significant index weights and their potential impact on performance. China would likely be assigned the largest weights in local emerging market bond indices, with a projected weight of 10% in the JP Morgan GBI-EM Global Diversified Index. Other global bellwether benchmarks such as the Bloomberg Barclays Global Aggregate and (LSE) Citi World Government Bond Index could assign China a weight near 5%, by far the largest of any of the existing emerging market constituent countries.

The chart below shows the variation between the performance of popular benchmarks and their simulated performance had China been included at projected weights. 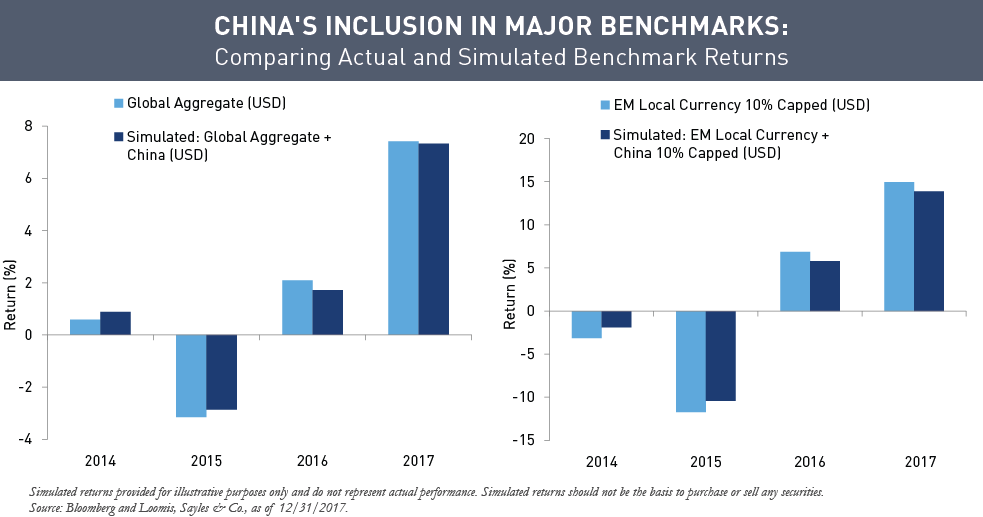 Past simulated performance does not guarantee future results.