What’s Behind the Recent Rise in Real Yields?

Rising yields and a steeper yield curve are par for the course as an economy enters the recovery phase of the global credit cycle. While rising yields are often painful for bond investors as bond prices decline, we view them as a signal that global reflation efforts are taking hold. Yields typically adjust as investors rebalance their portfolios and shift toward more risky assets that may offer higher expected returns. 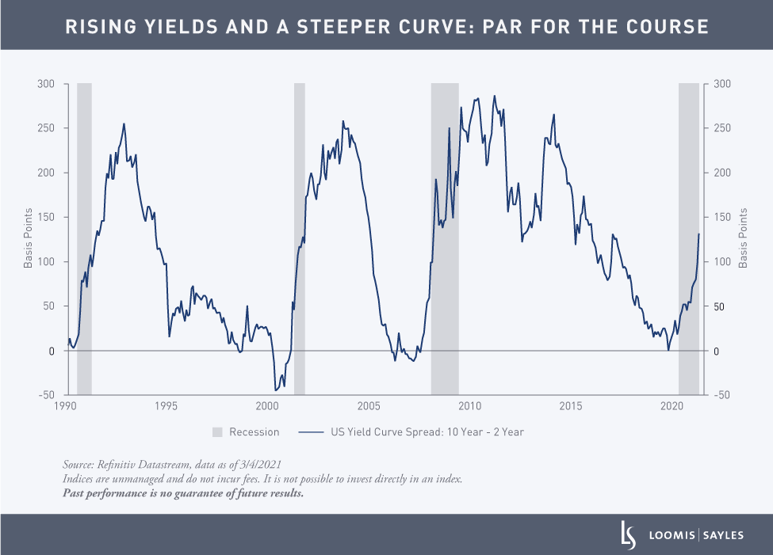 However, we believe the recent spike in real yields suggests there’s been a handoff in the reflation trade. The pace of the increase in nominal yields accelerated from an average rise of 20 basis points every two months to about 50 basis points just in the last month. As the pace accelerated, the primary driver of the increase in yield shifted from increasing inflation expectations to rising real yields. We believe this shift has caused a dent in risk appetite. The rise has fanned out into other markets, with global bond yields rising and some risk markets coming under pressure. Many people are recalling the 2013 “taper tantrum” when real yields spiked 150 basis points over three months because it coincided with a sharp hit to risky assets. They’re wondering if this could become a repeat. We don’t think so, but the outlook deserves some caution. Here, we’ll look at what happened and what may come next.

Yields have been rising since August 2020. Up until last month, the cumulative rise in nominal yields had primarily been driven by rising inflation expectations. We viewed that as a positive development and part of the economic reflation process. It indicated that markets were bringing inflation expectations back toward historical levels in the 2.0% to 2.5% range. During this period, the cumulative rise in real yields hovered around zero and that coincided with a solid rebound in risk appetite.

Then in the middle of February, President Biden’s full $1.9 trillion fiscal stimulus plan gained momentum in Congress and markets began to reassess the growth outlook. With tremendous fiscal support, pent-up demand and supply shortages, some street estimates began calling for GDP growth to reach more than 6% in 2021 and more than 4% in 2022. The market started questioning if real yields could stay low in such a strong, sustained growth scenario. Would the Fed let the economy run at these levels without raising interest rates? Would it have to hike more frequently than expected to keep a lid on inflation? Would the terminal federal funds rate be much higher than the 2.5% level guided to by the Fed? These questions triggered the perception of a slightly more sinister change in the pace and composition of rising yields.

The market began to bring forward rate hike expectations, from 2024 to Q1 2023, which drove the spike in shorter-term yields in the front end and belly of the yield curve. Rates across the globe followed US rates higher, forcing some central banks, like the European Central Bank and Reserve Bank of Australia (RBA) to talk down the rise in yields. The RBA also spent billions buying bonds to maintain its three-year yield curve control target. Though the market may be rattled, we don’t see the rise in real yields as a deflationary shock that could bring down risky assets significantly. The absolute level of real yields remains very low and is still deeply negative in parts of the curve. 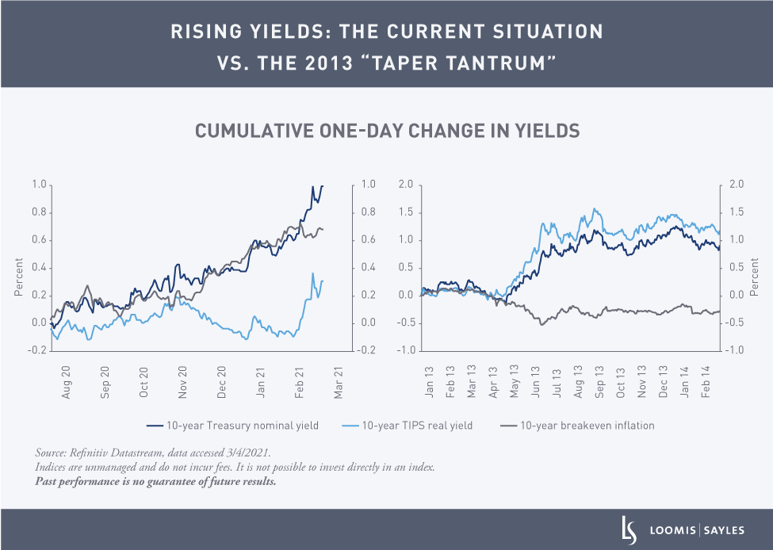 The heart of the matter

We think the volatility roiling the Treasury market comes down to a key question—will the Fed stay true to its inflation framework? It’s a new framework that seeks to maintain policy rates at current levels until they reach full employment and see inflation sustainably above 2.0%. Previously, the Fed would start hiking interest rates well in advance of inflation rising above 2.0%. The new framework hasn’t been tested in a reflationary environment yet. As a result, the market seems to be feeling out new levels and testing the Fed’s resolve. It doesn’t help that markets are currently operating on stale guidance from the Fed. The Federal Open Market Committee (FOMC) last published a formal rates forecast in December, and the next summary of economic projections isn’t expected until mid-March.

The market will be watching the Fed closely. We believe a material rise in real yields (a taper tantrum scenario) would require the Fed to take a hawkish turn on one of the factors below:

Up until recently, Fed officials were cheering the healthy rise in long-end yields. Once real yields began to rise more sharply, they went silent on the issue. The Fed has gone into blackout mode ahead of its upcoming meeting, so we’re not likely to hear from them for the next two weeks. After the meeting, we expect Fed officials to reiterate their two goals: inflation sustainably above 2.0% and full employment. It’s worth noting that we’re still far from full employment—there are still 8 to 10 million people out of work compared to pre-pandemic levels. We may not reach full employment until the end of 2022. If the Fed hammers home those two goals, particularly the employment goal, we believe it can help shape the market’s interest rate expectations. 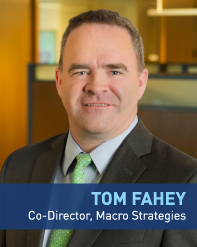 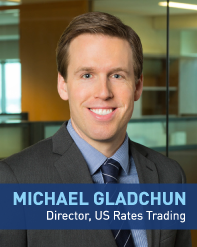