Crude Oil: The Bane of a Commodity Trader’s Existence

Oil traders everywhere probably had their fingers crossed that oil’s craziest trading days would not persist into the New Year. In 2015, we watched benchmark oil indices drop over 30% and the sheer number of shuttered commodity hedge funds is testament to how difficult trading ‘black gold’ has been.

Unfortunately, I expect 2016 to be no easier – full of fits and starts with lots of volatility in between. However, by end of 2016 I expect crude prices to rise to $45-50 from current levels of just under $30.

Why could volatility persist in 2016?

To answer that, we can look to the supply side of the equation.

1. 2015 was all about the oil market absorbing OPECs decision to keep its production quota unchanged. According to Bloomberg, the 12-member cartel unilaterally increased production by over 1.5 million barrels per day in 2015; Saudi and Iraq being the biggest offenders, which aggravated an already oversupplied market. In their most recent press conference, OPEC did nothing, in my view, to allay market anxiety by announcing they will keep production at current levels. Furthermore, OPEC, led by the Saudis, stressed that their current strategy was working and there was no reason to deviate from it. 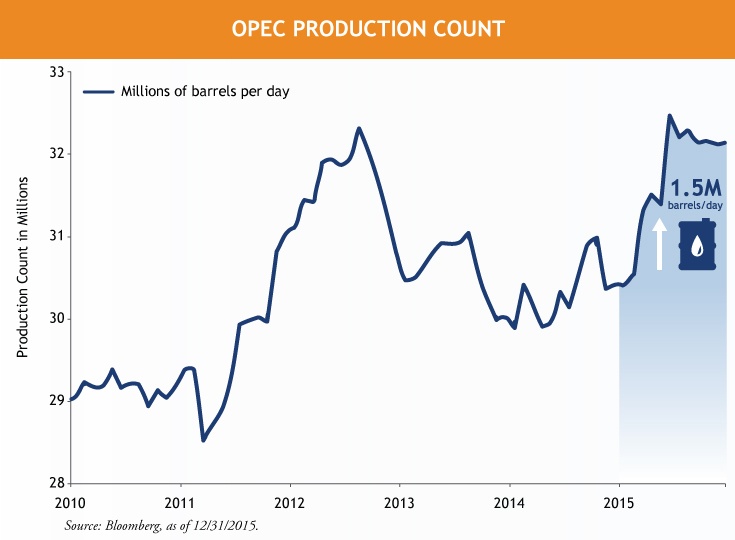 2. As OPEC production has persisted, global crude oil inventories have also continued to swell. In the US, at the end of 2015, we have set a record inventory at 486 million barrels in storage, according to the US Energy Administration (EIA). The US is the only country with significant ground storage availability; storage in rest of the world is almost full. A big question for 2016 is whether or not the US will have enough storage available in its tank farms. However, my base case is that the US has ample ground storage. Storage infrastructure increased roughly 30 million barrels in 2015. As a result, I expect WTI to trade near parity with Brent, the tightest it has been in years, as the Atlantic basin will continue to remain oversupplied with excess Middle East and West African oil. 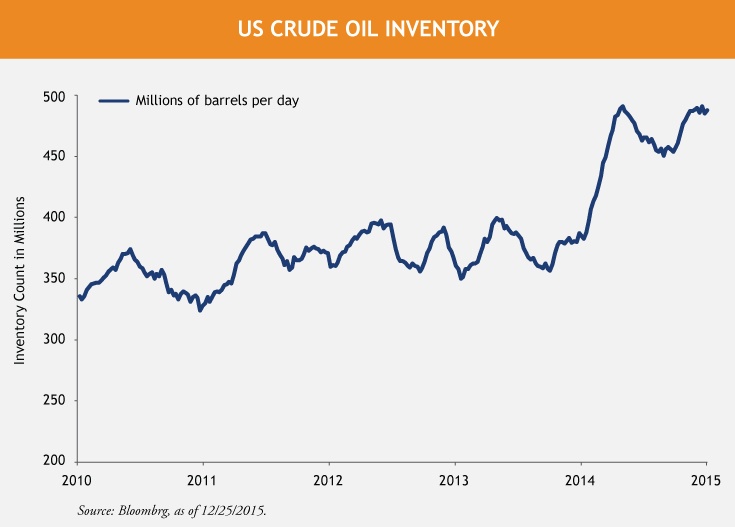 3. Another noteworthy supply issue that the market is grappling with is the agonizingly slow decline in US production despite rig counts plummeting by more than 60% in less than six months. US supply declines have been a lot slower and a lot smaller than once believed. However, there does seem to be some light at the end of the tunnel as supply has begun to show significant declines over the past 6 weeks.  According to my calculations, I expect production to decline by roughly 500K barrels per day year-over-year in 2016. 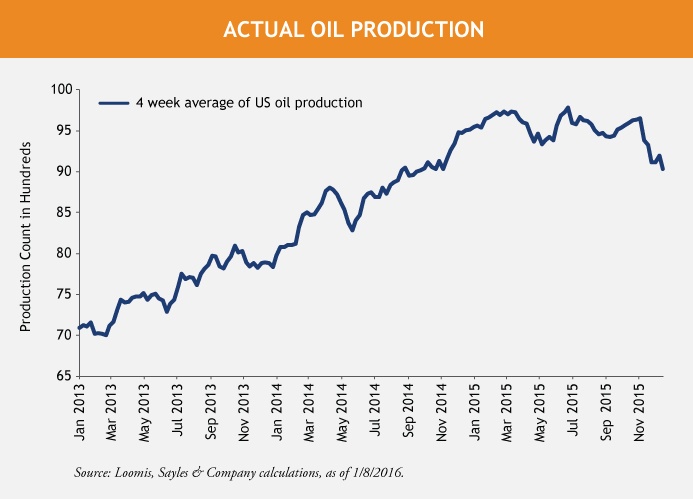 4. And last but not least – the elephant in the room – Iran. I still believe Iran’s future production is less of a mystery than that of the US, and that we should see somewhere around 500K barrels per day of new Iranian oil in the first six months (once exports initiate) and another 200-500K barrels per day over the 12 following months. Irrespective of the amount, the pace of Iran’s growth is a huge concern in an already oversupplied market although the recent geopolitical tussle with Saudi Arabia could mean much reduced supply from the Shiite nation.

Growth of crude demand in 2015 was impressive. On a year-over-year basis, we saw demand grow to 1.8 million barrels per day through a combination of price elasticity, some one-time buying from China and slightly improved demand in Europe. For 2016, the International Energy Agency (IEA) continues to expect hydrocarbon demand growth of 1.2 million barrels per day despite global GDP estimates for 2016 creeping lower, under 3% now. Demand growth can disappoint in the face of a continued slowdown in the Chinese economy or a further rapid appreciation in the USD, after the Fed hike, which can both lead to a significant drop in demand much like we witnessed in 2014.

IEA estimates that the current market imbalance is roughly 1.5 million barrels per day. Adding Iranian barrels to this equation and adjusting for global demand and supply declines in non-OPEC, I expect the market to balance in early 2017 (assuming no rapid price increase in the near term). I continue to believe that the massive H2’15 decline in crude prices was precipitated by the rapid rally we witnessed in the first half and prevented any meaningful drop in US crude production. As a result, I believe that the path forward for oil is to languish around these levels for approximately another 2-3 months. The longer prices remain at these levels, the stronger a rebound could be. However, the longer crude oil stays under $30, the risk of a significant geopolitical disaster also grows infinitely.