Why the OPEC+ Agreement is Good for the Oil Market

The oil market is selling off on the news that OPEC+[i] will raise production by 400,000 barrels per day in August. The cartel also acquiesced to the United Arab Emirates’ demand that OPEC adjust its baseline production number.

Despite the selloff, I think this could be a good outcome for crude oil. I saw the possibility of a fractured OPEC+ as a big risk to the oil market. The UAE argued that it had been shouldering an unfair share of OPEC’s production cuts. Before the July 18 agreement, it appeared that OPEC+ and the UAE had reached a stalemate, and tensions were rising. The last time the cartel fell apart, in March 2020, production flooded the market and crashed oil prices. With this agreement, OPEC+ appears to have regained control of the oil market, and I believe this development should be largely neutral for oil prices (absent other external influences). 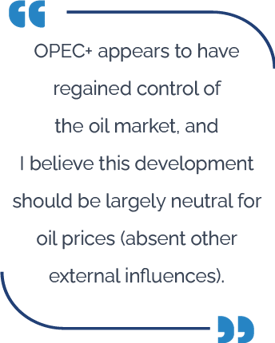 OPEC+ agreed to increase the UAE's baseline production number to 3.5 million barrels per day from 3.2 million barrels per day. It also adjusted the baseline numbers for Saudi Arabia, Russia, Kuwait, and Iraq starting in May next year. The adjustment does not mean the UAE will raise production by 300,000 barrels per day next month—rather, we expect the UAE to gradually ramp up in line with OPEC+’s plan to raise production by approximately 400,000 to 450,000 barrels/day each month until September 2022, when the cartel expects all of the COVID-19 cuts to be back online. OPEC+ cancelled its August meeting, but said it would continue to monitor the market and could slow production increases if demand is weak.

Demand is the variable to watch

Now that OPEC’s relationship issues appear to be out of the way, I think demand will be the key variable to watch. Oil demand has not snapped back the way some prognosticators had hoped, due in part to the spread of the COVID-19 delta variant, the slow global vaccine rollout and still-depressed air travel. The OPEC+ truce shows that the cartel is still working and should continue to manage the oil market. However, the fade of the reflation trade as well as renewed demand concerns may weigh on oil prices longer term.

[i] OPEC+ is a group of oil-producing countries comprised of the 14 members of the Organization of Petroleum Exporting Countries (OPEC), and 10 non-OPEC members.