On April 9, the Federal Reserve announced the creation of the Municipal Lending Facility (MLF), aimed at allowing state and local (S&L) governments access to credit so that they may continue to function in these hard times. 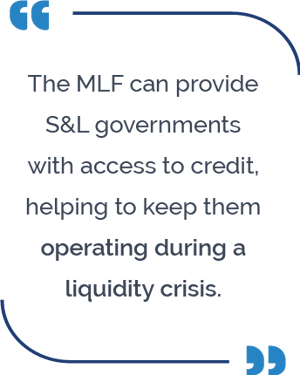 At the same time, fixed costs are remaining consistent, and variable costs like unemployment spending and healthcare expenses are rising. S&L governments are the largest single cohort of employment in the US; together with healthcare, they account for nearly one quarter of all nonfarm employment. These governments are trying to keep their employees on payroll and maintain first-responder efforts (police, fire, medics) in the face of sharp revenue declines and rising expenses. The MLF can provide S&L governments with access to credit, helping to keep them operating during a liquidity crisis, when investors may fear buying municipal securities.

Why it may not be enough

The aim of the MLF is to preserve S&L governments from a cash crunch, so that any possible recovery can be fast and strong when containment measures are lifted. This program is also aiming to limit payroll losses, helping governments, businesses, and households weather the crisis.

How the MLF works

The MLF facility was created using the Fed's emergency powers under Section 13(3) of the Federal Reserve Act, with the consent of the Treasury Secretary as required by Dodd-Frank.

The Fed will create a Special Purpose Vehicle (SPV) on a recourse basis. The Fed will lend funds to the SPV to buy municipal securities directly from the issuers at the time of issuance. It is notable that, in this facility, the Fed is not lending funds to banks to buy munis nor is it buying munis on the secondary market. The SPV will have the ability to purchase up to $500 billion of eligible notes.

Because the Fed is not able to absorb credit risk, the Treasury Department will put an initial $35 billion of equity into the facility as a backstop. The Treasury’s funds, appropriated to the Exchange Stabilization Fund by the Coronavirus Aid, Relief and Economic Security (CARES) Act, will backstop any losses the SPV may suffer if any securities bought from S&L governments default.

An S&L government may use the proceeds of notes purchased by the SPV to help manage:

The Fed SPV will buy up to 20% of general revenue and utility payments for the borrowing entity based on the financial year 2017. That is, there is a cap on how much a government may borrow, with the cap adjusted to the size of the government.

An eligible issuer may use the proceeds of the notes purchased by the SPV to purchase similar notes issued by, or otherwise to assist, political subdivisions and instrumentalities of the relevant state, city, or county. That is, governments may borrow directly from the Fed on behalf of other government units, but the issuer is responsible for the borrowing. This is a way for the Fed to lend indirectly to all government units without having to evaluate many thousands of different municipalities and authorities.

Each issuer that participates in the facility must pay an origination fee equal to 10 basis points of the principal amount of the issuer’s notes purchased by the SPV. The origination fee may be paid from the proceeds of the issuance.

The debt may be prepaid at any time without penalty.

Pricing will be based on an eligible issuer’s rating at the time of purchase "with details to be provided later." It sounds like the Fed has not quite finished figuring out how to price its lending. We find it notable that, unlike some of the Fed’s other facilities, there was no explicit cutoff for the ratings of the securities.