President Xi Jinping: His Own Man

China's President Xi Jinping is not a newcomer to the world political stage. But now, nearly five years into his presidency, many seem fixated on trying to define him. It’s not surprising—China and President Xi are front and center in some of today’s biggest headline risks, including the volatile situation in North Korea and the uncertain future of US trade policy. Beyond that, President Xi successfully consolidated political power at China’s recent Party Congress, a feat that has him drawing comparisons to Mao Zedong.

So who is President Xi? How does he differ from his predecessors? What could his leadership mean for China and the country’s international dealings? Here are my views.

President Xi has consolidated power in a spectacular way, stacking important government and Communist Party groups with his people. He has no obvious successor, a departure from the norms. This sets the stage for a new era of influence that could last beyond the official end of his term in 2022.

President Xi has been likened to other high-profile leaders from China and abroad, and it’s tempting to make assumptions about how he’ll rule based on these oversimplified comparisons. But President Xi is unique. He shouldn’t be taken as another Mao Zedong, Vladimir Putin, Deng Xiaoping or even Charles de Gaulle.

Unlike Mao, President Xi is a hands-on manager. He has shown a willingness to backtrack on policies that aren’t working. President Xi’s vision of a strong Communist Party has moved away from Deng’s concept of “collective leadership,” which was designed to prevent the overconcentration of power in one person after the Mao era. He has yet to match Deng’s success with transformative economic reforms, but it’s still early in the political cycle. Like de Gaulle, he believes in maximum power to effectively run the country. But unlike the former, President Xi has no intention of pursuing political liberalism. President Xi is his own man; do not extrapolate outcomes based on the experiences of other leaders. 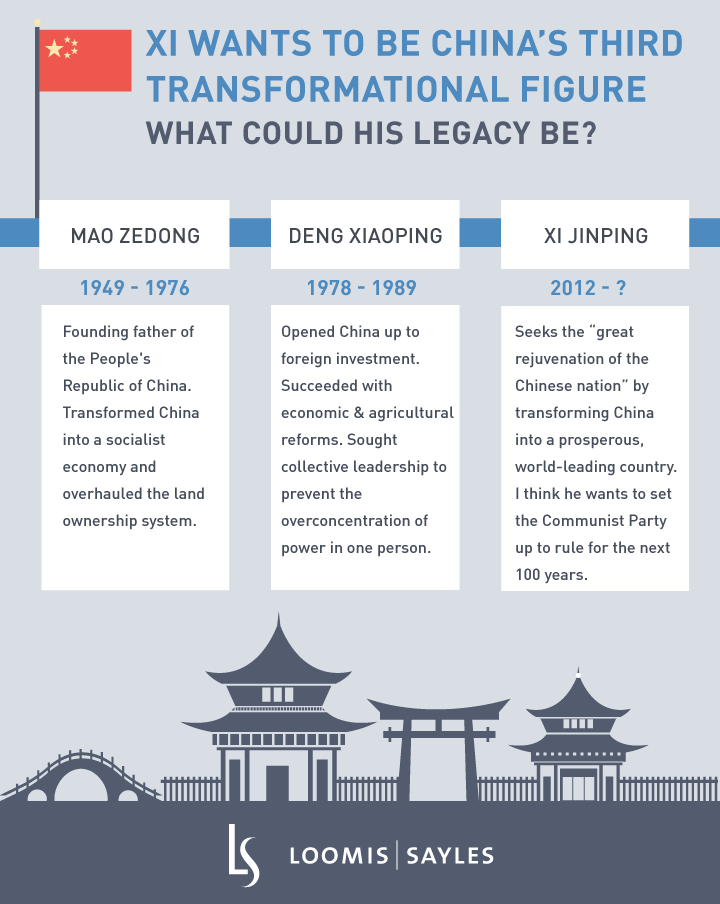 Setting the foundation for a strong Communist Party is essential to President Xi’s vision of a great China. This includes promoting the “purity” of the party through the creation of a “core value system of socialism, promoting culture confidence and Chinese traditional values.” Fighting corruption is a key to this vision. Many believe President Xi ignited the anti-corruption drive to consolidate his power. That is true, but incomplete. He also believed the party had become corrupt at its very core, and that corruption was partly responsible for many of the problems and inefficiencies in China’s economy. President Xi believes party discipline, more so than market discipline, will elicit efficient decisions for the country. Party discipline is critical for what President Xi calls “the great rejuvenation of the Chinese nation.”

A powerful—but not yet great—reformer

President Xi’s thought and name are enshrined in the constitution, which suggests he is more powerful than Deng. However, power is not the same as greatness. Deng kicked off reforms and the opening up of China’s economy, changes widely credited with lifting hundreds of millions of people out of poverty. Thus far, President Xi’s reforms have not led to any material transformation of the Chinese economy. To be fair, President Xi inherited a much different economy (burdened with debt woes) than Deng. Many think President Xi will aggressively accelerate reforms now that the Party Congress is over. I disagree, but I expect he will continue at a cautious pace, gently causing growth to moderate—certainly not in any destabilizing way.

The Western world often thinks of “opening up” and “reforms” in terms of Deng’s “open door” policy, which allowed foreign investment in China. I believe President Xi is genuine about reforms, but he doesn’t share the same motivation as Deng, who truly believed that open is better. I reiterate that President Xi’s primary motivation is achieving a strong and pure Communist Party. He sees reform as necessary for sustainable and good-quality growth, which in turn is a key to achieving an enduring, strong party.

I think this nuanced difference in motivation is a key to correctly calibrating expectations about President Xi. I believe that President Xi will open up as much as he needs to or as little as he has to, which could still be meaningful for China. That is, don’t expect a completely level playing field between domestic and international players. And don’t expect any reforms that impinge on the party’s strength. But do expect some liberalization as long as it ultimately benefits China. After all, despite his motivations, President Xi wants a better allocation of resources and incentives to promote his goals.