Two situations stand out as having the potential to disrupt the fiscal health of important states:

California’s drought is now in its fourth year and 2014 was its driest in recorded history. As of April 1, the water content of the Sierra’s snowpack was the lowest ever, at just 5% of the historical average. Ground water supplies are also declining as farmers and water agencies have increased their pumping to offset water shortfalls, raising concerns about the long-tem effect on aquifers.

In April, Governor Jerry Brown ordered a 25% reduction in urban water use that may be implemented as soon as June (agriculture, which uses 80% of the water in California, is so far exempt). It will be difficult to meet the state’s conservation targets and things could get ugly as competing interests battle over declining supplies. 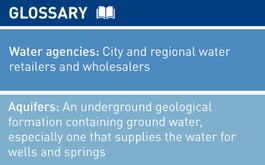 Some water agencies have challenged the legality of the mandated cuts. Also, a recent state court decision ruled that tiered pricing systems, where heavy water users are charged more money, must have a connection between the cost of providing water and what is charged. If the court decision is not overturned, state water agencies that currently use a tiered system may need to restructure their current pricing systems.

Water agencies can implement a few measures to conserve water, including limiting landscape watering, using recycled water where possible, and raising rates to discourage water use. If they are unable to raise rates sufficiently, the agencies will experience revenue shortfalls. Longer term, agencies will need to increase their investment in water supply and storage capabilities, investments which most likely will need to be funded by tax-exempt municipal debt.

State Revenues: Decline in oil prices is a double-edged sword

For many consumers, low oil and gas prices feel like a tax break. However, for states that rely on oil and gas tax revenue to support their operations, the precipitous drop in oil prices has created a budget shortfall.

Alaska, which relies on energy taxes for 88% of its revenues, has already announced that it is expecting a budget deficit of $3.5 billion for fiscal 2015.

Louisiana, which relies on energy taxes for 13% of its revenues, has reduced its fiscal 2015 revenue projections by $126 million.

Oklahoma and North Dakota, states that don’t rely as heavily on oil-related funds for their operating budgets, are adversely affected in terms of jobs and wages.  Oklahoma, which produces approximately 360,000 barrels of oil per day, saw private-sector payrolls decline by 12,000 in March, the largest drop since the last recession.

In North Dakota, where 1.1 million barrels per day are produced, private sector payrolls plunged by 3,000 in March.

In Texas, the most economically diverse among the large oil producing states, employment grew by 0.7% in the first quarter despite large declines in energy and manufacturing. Texas is predicting a $948 million decline in oil production taxes over the next two years, but overall the state is forecasting net revenue growth of 6% over that period.  At this time, I do not expect Texas’ economy to contract, but continued volatility in the energy sector could negatively impact other economic growth engines in the state.

Most of these states have accumulated substantial budget reserves over the past decade which should help plug their budget gaps in fiscal 2015 and 2016. However, I believe that a prolonged period of lower oil prices could lead to further economic weakness in these states.  If oil prices remain depressed for a long period of time, these states will have to consider cutting expenditures and/or raising taxes to balance their budgets.