The broadband industry is reeling from the one-two punch delivered by recent rulings that signal the advent of a much harsher regulatory landscape for internet service providers (ISPs).

The first hit: the Federal Communications Commission (FCC) reclassification of broadband internet services as ‘telecommunications services’ in February, making them subject to stricter regulations under Title II of the Communications Act.

The second: the FCC, in cooperation with the Department of Justice, blocked the merger of Comcast and Time Warner Cable (TWC) in April on the premise that the combined entity would exert too much control over the nation’s broadband network.

1. No relief on consumers’ cable bills

Good for the industry – but not such good news for consumers. The FCC has explicitly removed retail rate regulation from the revised net neutrality rules – although they left the door open for intervention on behalf of consumers concerning rate hikes deemed to be less than “just and reasonable.” Additionally, the FCC retains the authority to review interconnection arrangements between Internet Service Providers, like Comcast and Verizon, and “edgecasters” like Netflix and Apple TV, which rely on the ISPs’ pipes to deliver content. The prospect of some form of rate regulation has sent trade organizations representing the ISPs to file lawsuits against the FCC. 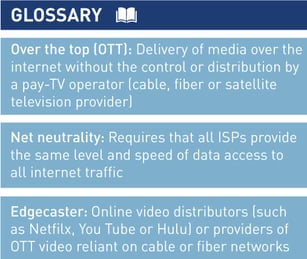 It is no coincidence that with greater clarity around net neutrality, there has been a flurry of announcements on new over the top (OTT) services recently, including HBO Now, Sony Vue, and Apple TV. With rules against blocking, throttling, or paid prioritization of content, the open internet order provides reassurance to “edgecasters” that their content will reach consumers without interruption and without opportunity for price gouging by the ISPs.

The fear that a combined Comcast/TWC would have had the ability and incentive to disadvantage OTT competition played a major role in the FCC’s decision to reject the deal. Greater OTT competition is not a positive for the pay-TV providers, but I believe the impact will be modest given that the fee structures of the new services are designed to avoid cannibalization of lucrative cable bundles. Consumer cost savings are minimal when combined with high speed broadband charges to fully utilize those services.

The Comcast/TWC deal had been widely predicted to pass regulatory muster by top industry lawyers and analysts, given the lack of anti-trust issues. For example, there is no established regulatory cap on cable operators’ national footprint (which is about 30% in this case) - this is because cable operators have no regional overlap and therefore do not compete directly against each other. Additionally, concerns of broadband concentration would have been addressed and regulated by the new Title II rules.

In Europe, where regulations are arguably the harshest in the developed world, cable operators in Germany and the Netherlands (which combined makeup over 50% of each country’s broadband market share), have been allowed to merge.

The cable and telecom industries have collectively invested more than $1 trillion over the past 10 years on state-of-the art fixed and mobile networks. The potential for heavy-handed regulation that could undermine the return on that investment has sent shudders through the industry.

Nearly every ISP has sounded the alarm to reduce network spending going forward if Title II prevails. Disallowing M&A, especially of larger, financially stronger operators buying weaker ones (such as Comcast buying TWC) with a firm commitment to modernize the target’s network is likely to discourage investment. Under-investing in the nation’s communications backbone could depress infrastructure spending in the short-term and stifle future innovation and productivity in the long-term.

The government’s objective to lower the cost of entry for new OTT competition is commendable. Still, in the long-run, I believe the government cannot expect the private sector to foot the sizable bill to further that objective without earning an adequate return.