We live in a world characterized by VUCA - volatility, uncertainty, complexity and ambiguity – and it appears 2015 may be another VUCA year.

Given the selloff at the close of December, most EM assets have cheapened to attractive levels. When the dust from last quarter settles, we may see a rebound in 2015.  Currently, one could argue that more value can be found in emerging markets – in debt, equity, and currency - versus mid 2014 levels.

But we recognize that EM performance will depend on many moving parts including  stabilization in oil prices, US interest rate movement, Russian geopolitics and the policy decisions of the European Central Bank.

The JP Morgan GBI- EM Global Diversified Index closed down -5.71% for the quarter and ended 2014 at -5.72%.  EM foreign exchange weakness was the main driver of underperformance. The currency component of the index was down -7.7% negating all gains made in the local bond market, which was up 2.2%.

Hit by dropping oil prices and its prolonged conflict with Ukraine, Russia was the big loser. It closed down -43.97% in the fourth quarter due to a combination of a currency collapse and a spike in interest rates. The ruble has come under significant pressure, down -34.9% in the quarter, one of the most spectacular falls for one of the world’s ten largest economies.

Nigeria, another net oil exporter, was also hit hard in Q4. It fell  -16.16% as it was forced to devalue the naira in November in the face of sliding oil prices and dwindling foreign reserves.

Latin America, a region up 6.12% in the second quarter, closed this quarter down -7.93% as its energy exporters, such as Colombia (-14.44%), struggled with the precipitous decline in oil. 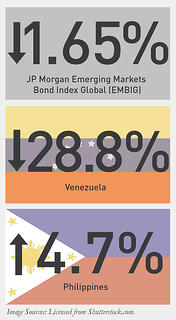 The JP Morgan Emerging Markets Bond Index Global (EMBIG) closed the quarter down -1.65%, but still finished up 5.53% for the year.  Market volatility played a key role in Q4, and we observed a major divergence in high grade and high yield. The investment grade component, buoyed by higher-quality longer duration names returned 1.25%.

There some positive stories with oil’s fall, including net importers. Turkey was the best index performer (+6.46%), followed by the Philippines (+4.69%), and Indonesia (+3.35%). Notably, the Philippines won a credit rating upgrade from Moody’s in December, moving to Baa2 as the country continues to reduce budget deficits and improve fiscal management.

The MSCI Emerging Markets Index closed down -4.6%, ending the year with a 2014 return of -2.1%. Frontier markets had their first down quarter of the year, posting substantial losses ( -12.5%) on the heels of depressed oil prices. Despite the down quarter, frontier markets closed 2014 up 6.6%.

Russian and Ukraine posted the worst returns, down -45% and -41%, respectively, with foreign exchange comprising the biggest component of losses for a US dollar investor.

On the flip side, China’s Shanghai market climbed +45%, popping back from a two year slump amid signs that the country’s controlled markets and currencies were slowly opening to foreign investors.