An endless number of factors can influence commodity prices. The headlines this year are focused on the global weather pattern known as El Niño and its potential to impact all areas of the commodity complex.

Based on their data, the National Oceanic and Atmospheric Administration (NOAA), the organization responsible for identifying global weather patterns, is predicting a greater than 90% chance that El Niño will continue through the northern hemisphere winter in 2015-2016 and gradually weaken through spring 2016. 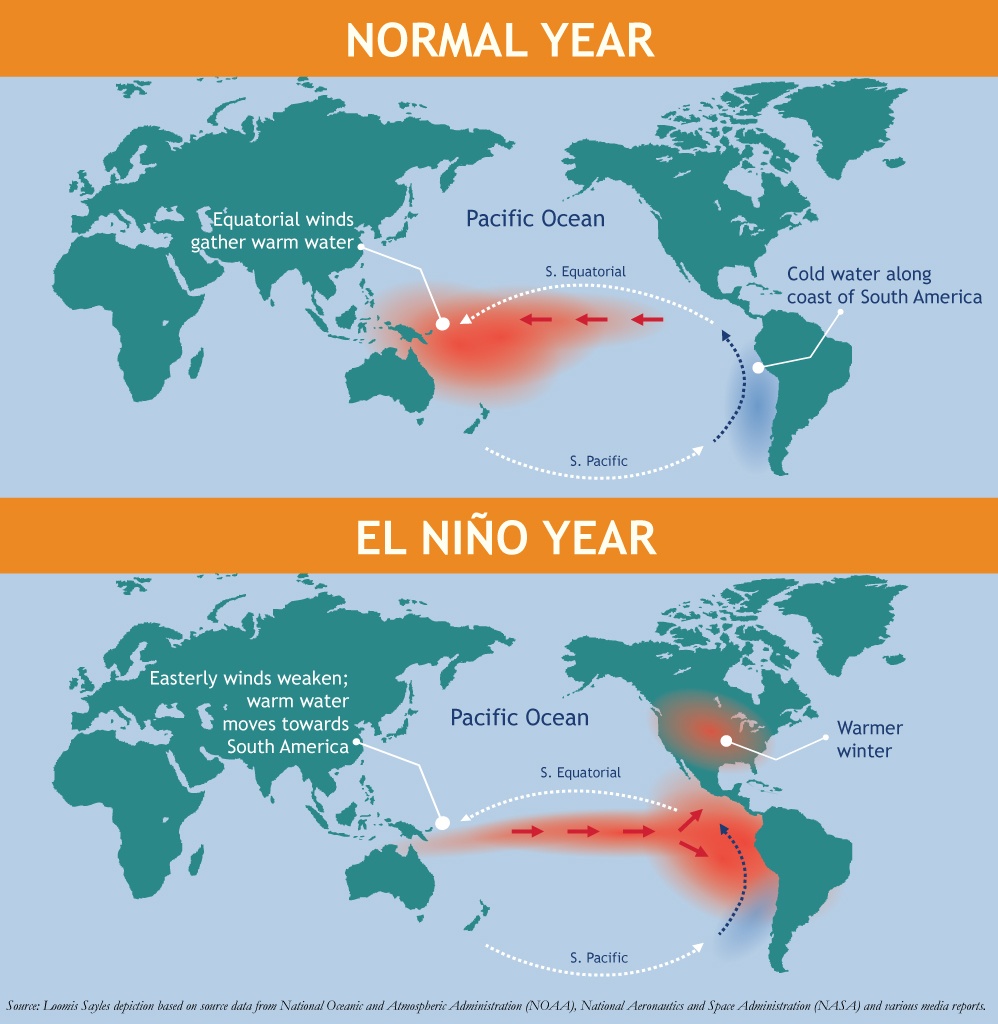 What is El Niño?

Typically trade winds blow east to west along the equator in the Pacific, pushing the warmer water and higher temperatures towards Asia. NOAA collects and monitors sea surface and air temperatures globally using a network of buoys positioned in the southern Pacific Ocean, from the Galapagos Islands to Australia.  During El Niño, sea surface temperatures rise and trade winds weaken.  As this phenomenon feeds off itself, the potential of an El Niño event grows.

While each El Niño event is different, during the 1997 event, the warmer-than-typical air in the eastern Pacific caused increased rain on the west coast of South America and droughts along the east coast.  Peru and Ecuador experienced severe flooding while Brazil and parts of Bolivia experienced prolonged droughts. The shift in trade winds typically causes overly dry conditions in Australia, Indonesia and other areas of Southeast Asia.

Already this year, the World Meteorological Organization (WMO) reported El Niño has impacted the South Asia monsoon, causing roughly 12% below average rainfall.  The potential impacts to US weather could be more favorable; it could bring some much needed rainfall and cooler weather to the southern and southwestern US while bringing warmer conditions to the northern portion of the country.

Besides plaguing the world with forest fires and health risks like dengue fever or malaria, a severe El Niño event has the potential to impact prices of many global commodities.

How could this weather impact commodities?

Grain supplies are typically the hardest hit by weather, especially wheat. With the US and Australia representing roughly 30% of global wheat exports, any extreme weather changes across the midwestern US or dryness in Australia could have serious implications on spot prices.

Any sharp supply constraints to global grains have the potential to put upwards pressure on prices: it is my opinion that the velocity and duration of price inflation will likely be directly dependent on the severity of the El Niño event.  However, it is important to note that according to USDA ending stock analysis, global grain supplies have grown markedly since 2010 -2013 when global supply was tight as a result of the Russian wheat export ban and the 2012 North American drought.[i]

In September alone, cocoa prices rose roughly 8% - which I believe was based largely on the fear of El Niño’s impact. With West African production representing roughly 70% of global supplies, weather patterns will need to be closely monitored as cocoa is at risk of falling short of demand for the second year in a row.

Palm oil has experienced an extraordinarily strong rebound in prices (roughly 27%) as the Malaysian ringgit has weakened and the threat of supply cuts due to El Niño grew during September.

Palm oil is used in products ranging from biofuels to chocolate chip cookies, and remains at risk from continued dry weather conditions in some parts of Indonesia and Malaysia, which collectively provides over 80% of the global supply.

Northern Chile experienced heavy rains in March and August this year causing deaths, street flooding, mudslides and power outages which temporarily halted work in some regional mines.  Any additional rain in the region, one of the driest places on earth, runs the risk of disrupting mining operations and elevating copper prices as Chile produces roughly a third of the world’s copper.