Don’t be Fooled by the Rally: Turkey Remains Under Pressure

The crisis in Turkey is rapidly evolving, with new developments emerging every day. Turkish assets sold off significantly from August 8 to 13, before experiencing a short covering rally beginning on August 14. Perhaps the selloff was overdone, or perhaps not. Either way, the trajectory for Turkey has not changed. We believe Turkey remains on an unsustainable path and has done little to address large imbalances and low investor confidence. The highly leveraged corporate sector has become increasingly vulnerable with the weaker Turkish lira, given the country’s large amount of non-lira debt.

Europe is unlikely to rescue Turkey

While there have been some symbolic foreign policy gestures between Turkey and the European Union (EU), we believe Europe is unable to offer wholesale financial rescue. Turkey released from jail two Greek soldiers and a local Amnesty International official. Both German Chancellor Angela Merkel and French President Emmanuel Macron offered words in support of Turkish economic stability. Merkel in particular is sensitive to protecting the 2016 EU-Turkey deal curbing migration to Europe; more broadly, EU leaders recognize the important economic and business links between the two sides. However, Europe's capacity to offer large-scale financial rescue is limited by Merkel's weaker domestic political standing, disinterest or aversion from other EU heads of state, and the sheer size of the check that would be needed. While Turkey needs hard currency, the Central Bank of the Republic of Turkey does not have a currency swap line with the European Central Bank (ECB) and is unlikely to receive one. Instead, the ECB will likely focus on providing ample liquidity support to euro-area banks feeling squeezed by their Turkey exposure. 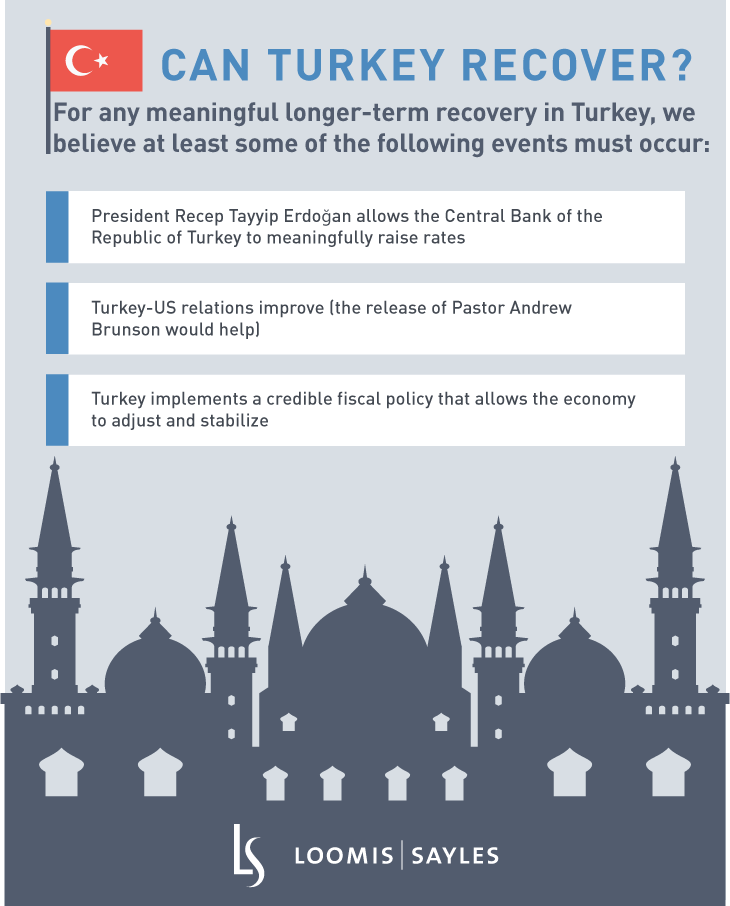