Deal or No Deal, the UK Faces Risks Beyond Brexit

The December deadline for a Brexit deal is quickly approaching. One consequence of Brexit was that firms couldn’t plan—or they were forced to plan for a no-deal scenario. It’s a big reason why the pace of business investment was so sluggish in the years since the 2016 referendum, particularly when the threat of no deal loomed large during much of 2019. With the end of Brexit in sight, one might hope for improvement. However, the UK faces a protracted mix of problems that could weigh on the economy beyond the end of Brexit.

1. Even with a Brexit deal, the terms could leave businesses hanging.

The UK must negotiate a trade deal with the EU before December 31, 2020. We believe that both sides are likely to reach a limited deal that focuses on goods but leaves some services unresolved (those terms can be addressed after the formal deadline). While such an agreement would avoid major disruptions, unresolved terms could increase costs for UK firms and prolong uncertainty. We believe it could also diminish the UK’s attractiveness to European and global firms.

2. After Brexit, will Scotland exit?

The issue of Scotland’s independence is reemerging. The Scottish National Party got a big boost in the 2019 UK election, gaining 13 seats, and the party is pushing for another referendum on independence. According to polls, support for Scottish independence is consistently above 50%, higher than the support leading up to the 2014 referendum.[1] Anger at Brexit, the prime minister, and the UK’s COVID-19 response has likely contributed to Scottish dissatisfaction. We believe that if nationalists have a strong showing in Scotland’s next parliamentary election in May 2021, it could fuel the push for independence and raise the pressure on the UK government to allow another referendum. In our view, this issue could mimic (and extend) the business and investment uncertainty caused by the Brexit process.

3. The fiscal response to the COVID-19 crisis is tapering, which could compound Brexit effects.

The UK responded to the COVID-19 crisis with an expansive furlough program through which the government effectively assumed payrolls across wide swaths of the economy. The program has begun tapering and ends on October 31. Subsequent measures will likely be narrower and more targeted. The employment outlook will depend on economic activity, business and consumer confidence, and, by extension, COVID-19 control. This is not an ideal situation to mix with Brexit, which will force firms to incur new costs just to maintain previous levels of business. Before the pandemic, the government had hoped to use fiscal tools to offset the anticipated hit from Brexit and boost its vision of a new, global model for Britain. These plans now appear to be far less realistic. 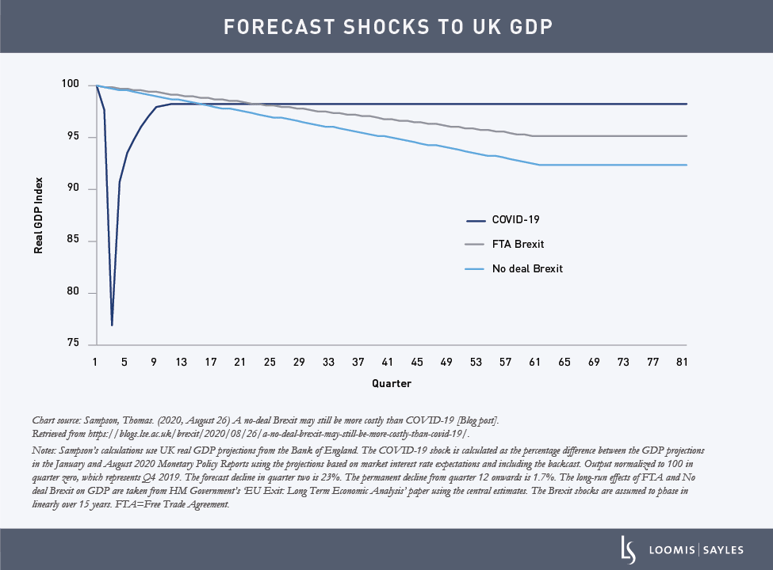 The Bank of England is recalibrating its options.

With the UK facing a prolonged period of economic uncertainty, the new Bank of England Governor, Andrew Bailey, has signaled several adjustments to the bank’s policy options. He has suggested a shift away from viewing sovereign quantitative easing (QE) through the lens of the stock effect.[2] That framework was crucial to the global monetary policy response to the 2008 financial crisis, so Bailey’s speech marks a big change in central bank thinking. The Governor indicated a preference for more targeted options; further corporate bond purchases and incentivized liquidity provision programs appear to be in the mix. Negative rates seem less likely but should not be ruled out. One interesting possibility is that the bank may consider yield curve control to keep rates low while easing up on overall gilt purchases. Will this new approach work? Only time will tell.

[2] The stock effect is the impact on monetary conditions caused by the overall amount of sovereign bonds held on a central bank’s balance sheet. By contrast, the flow effect stems from transactions in the open market.