Credit markets are bifurcated, and there’s a major yield difference between the perceived winners and losers. This trend is creating a lot of questions—and potential value—for credit investors. Here’s my take on the current environment and why I’m excited about the opportunity it’s creating.

Can the high yield market absorb a flood of fallen angels?

Many aspects of this COVID-19 environment feel unprecedented. But so far, the fallen-angel downgrades we have seen are pretty typical of an economic downturn. During February and March, about $130 billion of debt was downgraded to high yield. The 2009 and 2002 downturns saw about $141 billion and $125 billion, respectively, of fallen angels.

What’s different this time? The velocity, for one. This cycle, it only took two months to notch $130 billion of fallen angels. In 2009 and 2002, it took about six months to reach roughly that level. Another is the scale of looming potential downgrades. The BBB universe hit an all-time high of $2.6 trillion in December 2019.1 Loomis Sayles’ credit research analysts have identified roughly $678 billion of BBB bonds (or 21.1% of the BBB market) as having medium or high risk of downgrade.2 To put that figure in context, the entire BB market is $666 billion.3

The amount of BBBs at risk of downgrade and speed at which companies have deteriorated have raised concerns that fallen angels could overwhelm the high yield market. I think the downgrade trend will continue. It certainly won’t be painless, but downgrades on that scale could potentially create a lot of interesting opportunities for investors. Forced selling should prompt bonds to change hands in already illiquid markets, which can lead to mispricings.

What industries are most vulnerable to additional downgrades?

At an industry level, the initial $130 billion wave of downgrades was made up mostly of autos and energy issuers. Some of these were companies we believed were vulnerable to downgrade when economic conditions turned because of leverage levels, operational shortcomings, or industry challenges. The other major source of downgrades was company-specific strategic decisions; for example, maintaining dividend payments.

Looking ahead, the most at-risk industries include airlines, retailers, consumer product companies, energy, and cyclicals like autos. The severity hinges on questions that are difficult to answer. When do widespread quarantines end? When will people start going out to eat, traveling, returning to school and work? Will the crisis change consumer behavior long term? Will the virus have a second surge? When will widespread testing and vaccinations become available? All of these factors will play out eventually, but some companies can’t wait long. The rating agencies have moved quickly so far, and that could continue. The agencies’ actions will be a big determinant of future downgrades. Will rating agencies see COVID-19 as temporary and look through the near-term effects? Or could they move the goal post and change the definition of what qualifies as investment grade credit? Uncertainty and default concerns are likely to cause swings in spreads throughout the recovery.

Has the Fed’s intervention leveled the high yield playing field?

Corporate debt burdens relative to earnings were pretty high coming in to this crisis. In my opinion, that picture is only going to worsen now that COVID-19 has put profits for just about every company under tremendous pressure. The federal government and Federal Reserve are stepping up in a big way, and they are acting much faster than they did in 2008. The Fed’s support has included a massive quantitative easing effort and programs to help support large corporations, small- and medium-size businesses, municipalities, and consumer credit. It seems to have decided to inject liquidity into the market until the economy can get going. I think the message is: we don’t want a viable company to go under just because it couldn’t borrow.

But the Fed’s drawn some lines that will be important for credit investors. Under current guidance, fallen-angel companies had to be rated investment grade as of March 22 by two of the three major rating agencies for their debt to be eligible for Fed purchase. The programs have additional considerations that may complicate and delay implementation. For example, companies will have to attest that they are eligible for the primary and secondary corporate credit facilities; the optics and logistics of opting in may deter some companies. So while news of the Fed’s corporate programs buoyed markets, the implementation process could drive more dispersion. I believe it will be important for investors to look at every fallen angel individually and consider the short-term technicals, longer-term fundamentals and current valuation.

How is this environment changing the high yield company landscape? 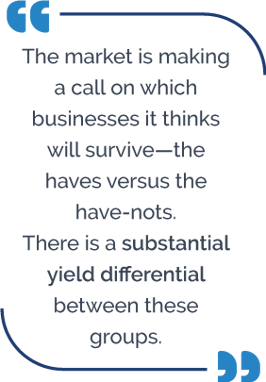 We are pretty comfortable that most high yield companies will be able to refinance over the next 12 months. The Fed’s action has brought yield down and helped open up the new issue market, allowing many companies to refinance more quickly than they would have before the Fed announced its corporate credit programs. As a result of the credit downturn, many companies have drawn down credit lines to alleviate their cash needs. But we’ve also seen this environment pull forward some corporate defaults that we have been expecting. These defaults aren’t happening because companies can’t refinance upcoming maturities; it seems they’re taking a hard look at their businesses and this economy and saying, “This isn’t going to work.” Instead of trying to limp along for another year or two, they’re defaulting. This “pull forward” effect has happened very quickly.

I think we’ll also see pull forward in terms of business winners and losers. You’re seeing some likely and some unlikely winners. For example, the shift to e-commerce versus brick-and-mortar retail is accelerating right now. At the same time, grocery stores are also on top of the world. The market is making a call on which businesses it thinks will survive—the haves versus the have-nots. Investors seem willing to pay up for the haves, and they don’t want to own the have-nots. There is a substantial yield differential between these groups. We get excited when we identify companies that we think are potential long-term survivors but the market does not. At Loomis Sayles, we rely on our fundamental research and look for chances to be selective buyers when markets are indiscriminate. In these bifurcated credit markets, I see substantial opportunity to potentially add long-term value.