COVID-19 and turbulence in the oil market have been reshaping daily life, economic fundamentals and market activity for weeks. Emerging markets (EM), like the rest of the world, have been along for the ride.

As a group, there are some commonalities that may leave EM countries particularly exposed to the human and economic tolls of COVID-19. EM countries tend to have large and dense populations, poverty, weak healthcare infrastructure, weak fiscal positions, lack of access to capital by small- and medium-sized businesses, and lack of social safety nets—all vulnerabilities. But each EM economy is distinct and we are seeing evidence that there’s potential for some of the more dire headline risks to provide unexpected bright spots for some of these economies. Here’s a look at some of the risks and opportunities I see for EM economies.

Oil prices: painful for some; a respite for others

The oil market has suffered twin shocks: demand destruction caused by the pandemic and the disagreement between Russia and Saudi Arabia over production cuts. The precipitous fall in oil prices will be extremely painful for oil exporters, especially high-cost producers. Petrostates across the Middle East, Africa and Latin America that are overly dependent on oil to finance their external accounts face the risk of insolvency and an ensuing sovereign debt crisis. This is especially true of countries that budgeted high oil prices, north of $50, to issue external sovereign debt. While some of these petrostates have sizeable foreign exchange reserves, they also depend on oil revenues to finance their national budgets. Saudi Arabia, for instance, needs oil prices to be close to $80 to balance its budget.1 Furthermore, many of these governments are also responsible for the debt of their national oil companies. Plummeting oil revenues could lead these petrostates to the IMF’s door for a bailout.

On the flip side, lower oil can be a welcome respite for large oil importers such as China and India. In addition to lower oil prices, the demand destruction caused by the pandemic and unprecedented actions of central banks worldwide have a silver lining for many EM countries—potential improvement in their external balances and investment flows. Lower 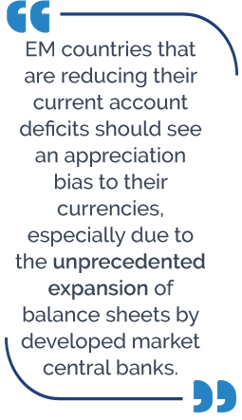 demand and lower oil prices could more than offset the negative impact of lower exports and reduce the net demand for foreign exchange in several EM economies. Countries such as South Africa, Indonesia and Brazil should see a marked improvement in their current account deficits this year. India should most likely see a current account surplus for the first time in nearly a decade as crude oil accounts for over 20% of India’s import bill.2 Even an oil exporter like Russia could see a current account surplus as lower demand helps to offset lower oil exports. EM countries that are reducing their current account deficits should see an appreciation bias to their currencies, especially due to the unprecedented expansion of balance sheets by developed market central banks. This expansion should provide support for risk assets and, to some extent, reduce volatility of portfolio flows.

Low oil prices and demand destruction caused by the pandemic should be extremely disinflationary to EM economies, which could give their central banks more room to cut real rates, even though nominal rates have already come down a lot. This should help corporate and household balance sheets during this recession. Unlike developed-world central banks, which have deployed zero interest rate policy (ZIRP) and negative interest rate policy (NIRP) tools, EM central banks will likely keep real rates positive to help provide support to their currencies and investment flows.

The significant stimulus injected by EM governments into their economies to deal with the economic consequences of the pandemic as well as potential ongoing stimulus should lead to a major increase in fiscal debt burdens and debt ratios for these economies. Additionally, fiscal risks should increase due to contingent liabilities such as loan guarantees that will show up on fiscal balance sheets. The IMF projects that the fiscal balance of EM economies as a percentage of GDP could deteriorate to -9.1% in 20203 from -4.8% in 20194 and that the fiscal debt could increase to 62%3 from 53.2%.4 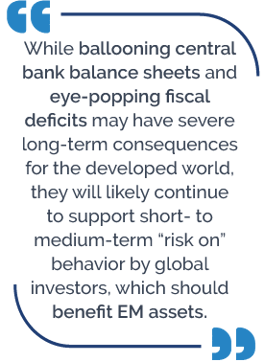 Deficits and debt increases are concerning, but EM economies should, for the most part, remain relatively interesting to foreign investors largely due to their relatively higher real interest rates. It appears developed market central banks will cling tightly to their ZIRP and NIRP policies to avoid upsetting their fragile economies and investor sentiment. Since the global financial crisis, investors have almost come to rely on the “backstop of the Fed”—quantitative easing and low interest rates to help keep asset prices rising. In an unprecedented move, the Fed recently announced that it will start buying high yield bonds to help provide liquidity to credit markets. While ballooning central bank balance sheets and eye-popping fiscal deficits may have severe long-term consequences for the developed world, they will likely continue to support short- to medium-term “risk on” behavior by global investors, which should benefit EM assets. Countries that came into the crisis with strong balance sheets and responded prudently to the crisis through the health, fiscal and monetary fronts (Peru is a good example) should be beneficiaries of investment flows.

Looking ahead, uncertainty is likely to persist for the time being and a resurgence of the virus, despite strong virus control measures, remains a key risk. We believe equity markets globally are not priced for that risk currently. But a “baby with the bathwater” approach to EM economies now may be ill advised. China’s current status can give us some perspective. Chinese equities were down 10.2% in the first quarter, primarily due to a near “militaristic” response to the virus and subsequent policy actions. While the human impact of China’s response has been highly controversial, the economic impact has been positive. The IMF projects China will grow 1.2% in 2020, one of a handful of economies to have positive growth this year (India 1.9%, US -5.9%).5 Chinese consumption has come back to 85% of normal levels.6 The Chinese have been returning to work and Chinese business activity has resumed, albeit at a slower pace than before the outbreak. Almost 80% of Chinese workers have returned to the manufacturing facilities where they work.6 Although China appears to be early in its recovery, it should give EM investors some confidence that there is light at the end of the tunnel.

2Source: India’s Department of Commerce, as of December 2019.