President Biden has quickly begun executing on his policy agenda. In his first ten days in office, he announced the United States will rejoin the Paris Agreement and announced a sweeping climate plan. He appeared to come down hard on the oil and gas industry in the US. But did he? President Biden’s administration cancelled the presidential permit for the Keystone XL pipeline, ordered a cessation of leases in the Arctic National Wildlife Refuge (ANWR), directed federal agencies to eliminate fossil fuel subsidies and temporarily suspended new fossil-fuel-related leases and permits on federal land. President Biden had telegraphed these moves during his campaign, so they did not come as a surprise to me or the market.

The administration’s first moves support the base case I laid out before the election, and I believe they will have fairly limited near-term impact on oil and gas producers and production. Here’s why: 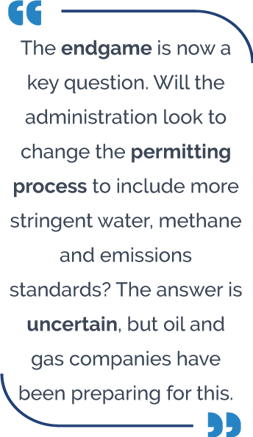 The endgame is now a key question. Will the administration look to change the permitting process to include more stringent water, methane and emissions standards? Or will Biden try to balance the demands from environmental groups and the economic impacts of a carbon clampdown?

The answer is uncertain, but oil and gas companies have been preparing for this. Onshore producers listened to President Biden’s campaign pledges and began stockpiling drilling permits in 2020. As a result, companies with significant acreage on federal land have several years of permit inventory. Given this deep inventory, I do not believe an extension of the permitting ban beyond the 60 days would have a significant impact on these companies.

If the permitting ban is extended past 60 days, the administration could face lawsuits and complications. A long-term cessation of permitting would conflict with the Bureau of Land Management’s mandate to maximize the public value of federal land; the agency would likely have to change its mandate.

In my view, the administration’s most likely endgame is a move toward Colorado’s model, which has stricter regulations but can still be profitable for oil and gas companies.

Going forward, I expect President Biden to continue supporting the ongoing energy transition by ramping up regulation of the oil and gas industry. However, I do not expect fracking or drilling in the US to be eliminated under his administration as the global economy can’t transition away from oil and gas overnight. I believe permitting could become more difficult, companies may have to reduce emissions and flaring, and it will become harder to build pipelines. Many energy companies have steadily moved toward lowering emissions and flaring ahead of these expected restrictions and to improve their ESG profiles, so the industry is already moving in a more ESG-friendly direction. The push away from oil and gas is evident; how quickly it can happen remains to be seen.

Investment recommendations may be inconsistent with these opinions. There is no assurance that developments will transpire as forecasted and actual results will be different. Information, including that obtained from outside sources, is believed to be correct, but Loomis Sayles cannot guarantee its accuracy.