The US Treasury market seems to believe the Federal Reserve will start hiking interest rates in the second half of 2022 with a relatively shallow path for rate hikes thereafter. Market pricing appears to imply that the Fed will raise rates by about 100-125 basis points (bps) in the two years following “liftoff.” That’s about half the pace and magnitude of the 2016-2018 tightening cycle, which was already slow by historical standards.

Why is the market projecting this low, slow rate path? The economic outlook is uncertain, and I believe this slower implied pace of hikes incorporates some probability that the tightening cycle is either delayed or derailed. However, if and when economic conditions meet the criteria for liftoff, I think this cycle has three distinctive features that could propel a faster pace and greater magnitude of tightening than the market seems to expect.

In previous cycles, the Fed began tightening in anticipation of achieving its economic objectives. This preemptive approach targeted a “soft landing”—growth moderating toward trend levels while the Fed gradually nudged up interest rates to a more neutral setting. In this cycle, the Fed has explicitly committed to keeping interest rates pinned near zero until its employment and inflation objectives have been achieved. But I believe this approach, designed to let inflation run hotter, could make it difficult for the Fed to act gradually if and when it starts to tighten.

It’s worth noting that Fed Chair Jerome Powell recently suggested that the timeline for tapering asset purchases this time around could be shorter than in previous cycles. He noted, “The economy is much farther along than it was when we tapered in 2013."[i] It’s not hard to imagine similar messaging around the rate path when the Fed starts preparing for liftoff. 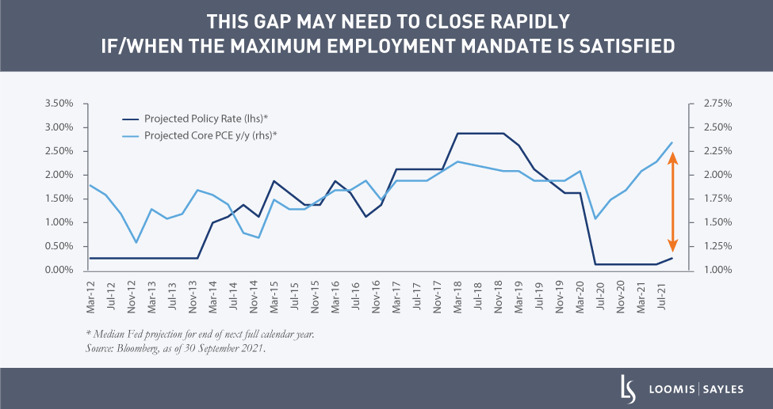 2) Tightening in tandem with global peers; avoiding the “policy mistake”

Another distinct feature of this cycle is that the Fed’s market-implied policy rate is currently priced to track its global peers in monetary tightening rather than lead by a significant margin. This is in contrast to the prior two cycles, especially 2016-2018 when the Fed was priced for, and ultimately delivered, about 150 basis points of tightening in excess of global peers (as shown in the chart below). The Fed’s “go it alone” approach was one factor that contributed to significant US dollar appreciation during that period. The stronger dollar tightened global financial conditions by increasing inflationary pressures abroad, putting stress on foreign balance sheets with US-dollar-denominated liabilities and inducing capital flight from emerging economies. The currency channel amplified the impact of the Fed’s rate hikes, and the aggregate effect ultimately weighed on both domestic and global growth. Now, with hindsight, the “go it alone" approach looks like a classic “policy mistake.”

Today, the Fed’s prospective tightening cycle appears much more aligned with the prospective paths of its global peers. A strong dollar is less likely to be a factor in this scenario, which would reduce tightening through the currency channel. I believe there may be greater capacity and need for aggressive tightening via interest rates as a result. 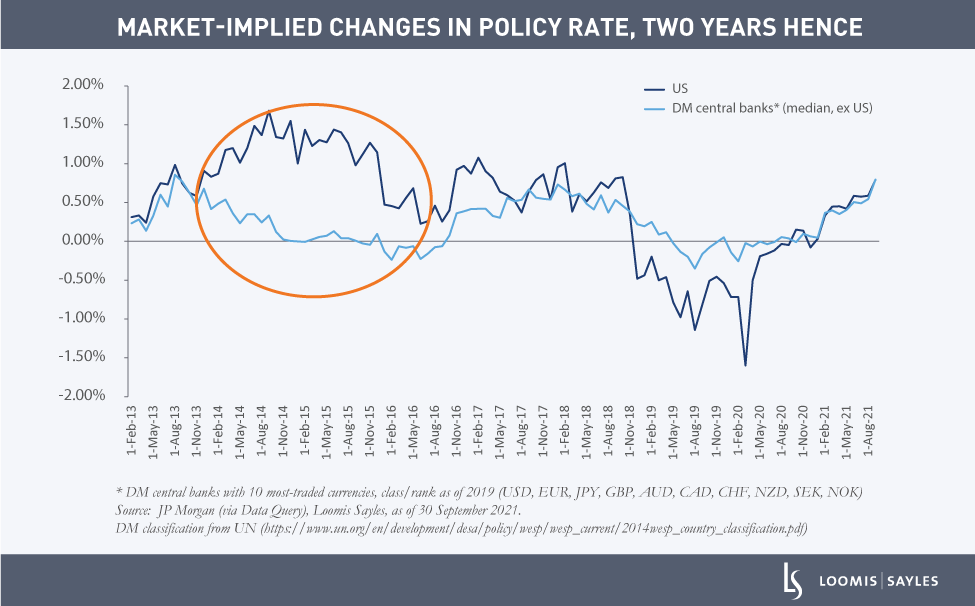 Quantitative easing (QE) reduces the amount of interest rate risk (duration) the market has to absorb. During previous QE programs, when Treasury issuance was mostly stable, tapering QE purchases materially increased the amount of duration flowing into the market.

This time, tapering is expected to coincide with a significant reduction in Treasury issuance. This means that, for the first time, the net amount of duration flowing into the market should remain fairly stable as a QE program is wound down (see chart below). Unless an unforeseen tantrum occurs, this tapering cycle may be relatively ineffectual in terms of tightening financial conditions. While that may be welcome news at this point in the cycle, I believe it does suggest that interest rates will have to do the heavy lifting when it comes to tightening financial conditions. 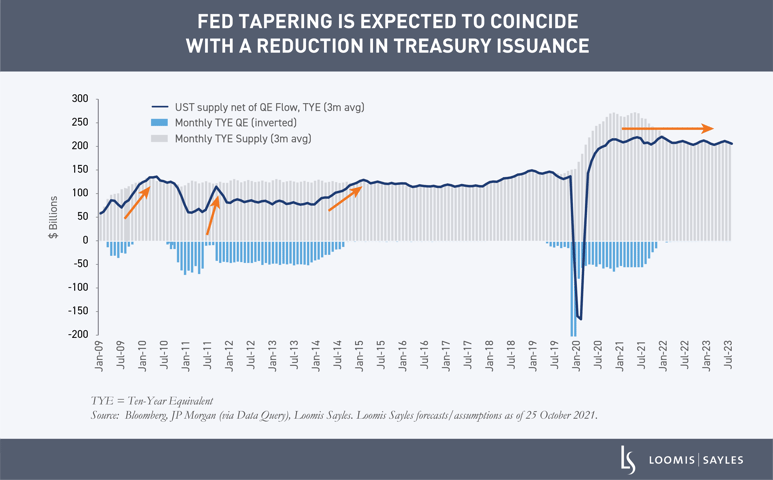 The market’s expected timing of an initial interest rate hike in the third quarter of 2022 was recently pulled forward from the first half of 2023. While this timing is plausible, I think it is a bit aggressive.

If and when the Fed begins to normalize interest rates, I believe a later liftoff coupled with less tightening through the currency and balance sheet channels could lead to more tightening via traditional interest rate hikes. Crucially, this may be a feature of this cycle rather than a bug. Remember, the Fed’s new average inflation targeting framework is trying to address the challenge of structurally lower interest rates and the lack of “policy cushion,” or room to cut interest rates in the event of a downturn. A goal of lifting rates later is the ability to lift them higher. As current Treasury Secretary and former Fed Chair Janet Yellen recently stated, “If we ended up with a slightly higher interest rate environment, it would actually be a plus for society's point of view and the Fed's point of view.”[ii]

From a market perspective, I see scope for a further rise in longer-dated Treasury yields. In my view, what matters most for longer-term Treasurys is not when the Fed starts a tightening cycle, but where rates are when it ends.