The Invisible Hand Clobbers the Shanghai Market & the State Intervenes

Can the government control this tailspin?

Anything that goes up as fast as the Chinese stock market was bound to correct. The Shanghai Composite Index value doubled over the last seven months (December 2014 – July 2015) and the rise was not based on brightening fundamentals (the Chinese economy has been slowing for more than a year.)  It was speculative investors who drove this meteoric rise – and mainly because the government had explicitly stated a higher stock market as a goal.

If you take all the oxygen away, the creature is bound to stop moving.

In the last two weeks the Shanghai stock market has fallen far faster than it rose losing 32% of its value (it is still up by around 14.7% from the beginning of the year as of July 9th).  The government has struggled to arrest the slide. The interventionist tools trotted out in the last couple of weeks failed.  The stock market just kept cascading downward. In a sign of desperation over this last weekend, the government resorted to the kitchen sink approach, throwing a gaggle of measures at the problem. Large institutions have been engaged to buy stocks, others have been prevented from selling until the index goes back above 4500. Margin lending rules have been relaxed.  Trading on more than half of the stock listings on the combined Shanghai and Shenzhen exchanges has been suspended. 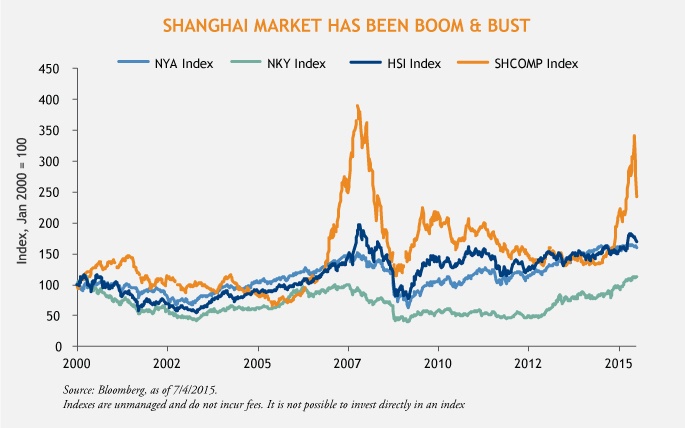 Why should we care?

The larger problem is that the government’s reputation for infallibility is at risk, both at home and abroad. The scale of the debt used to purchase shares is so large that unwinding it risks destabilizing the financial system. And the loss of confidence for businesses and consumers is bound to damage an already debilitated economy. Most market participants have cast a blind eye, merrily assuming the Chinese government’s unfailing ability to manage any crisis. I have long been on the other side of that argument. As talented as they are, the Chinese leadership is hardly omniscient. “Managing” an economy as large and as complicated as that of China is simply not possible. Does this event finally raise the curtain on the wizard’s humbuggery? Perhaps.

Credibility and trust in the Chinese Communist Party is vulnerable.

Does the government’s clumsy handling of the Shanghai stock market correction raise doubts about its capacity to achieve other challenging goals? We believe it should. Can they really manage to (1) engineer a gradual GDP slowdown in 2015 to around 7%? (2) keep the Chinese currency (CNY) stable? (3) stabilize the property market’s slide downward? (4) arrange a smooth rollover of the massive amounts of local government debt?

Here are the top four economic risks as we see them:

1. Messy Deleveraging of Debt  Much of the Shanghai market’s catapult upward resulted from                       borrowed funds. The scale of the borrowing was unprecedented and as it unwinds, there is                         systemic financial risk. Currently, margin lending as a percentage of total market capitalization in               Japan (1.5%) and US (2.5%) is extremely conservative compared to China, where margin lending (both official and unofficial) at its peak was 15-20% of the free float. Over and above the margin lending, the overall Chinese debt load is a colossal and complicated web of interlinked pledges and collateral. The government may have difficulty managing a smooth unwind of the vast leverage throughout the system.

2. Further Losses in Confidence Confidence in the economy is likely to be further eroded. The                   sharp drop in the stock market may have a negative wealth effect on consumer spending. A loss of             confidence will surely increase capital outflows, putting more stress on the currency to depreciate.

3. Spillover into Property Markets The Chinese property markets are still suffering from a large                   overhang of inventory, slow sales and slowing construction. A sustained weakness in the share market will do little to repair weakness in this sector.

4.  More Downward Pressure on Commodity Markets More slowing in private investment could further reduce construction activity, contributing to more weakness in commodity prices as well as  a stronger US dollar. 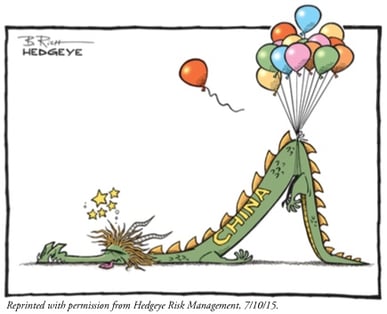