The FIMA Repo Facility: The Fed’s Solution to the Global US Dollar Crunch

On March 31, the Federal Reserve announced the creation of another new liquidity facility; this one is aimed at central banks and international institutions.

This new facility is a temporary repurchase agreement facility for Foreign and International Monetary Authorities (FIMA), and is called the FIMA Repo Facility. It is intended to help support the smooth functioning of financial markets, including the US Treasury market, and thus help maintain the supply of credit to US households and businesses.

A global solution with domestic implications

The Fed is functioning as a global central bank, as we believe it should in view of the US dollar’s reserve status. But the FIMA Repo Facility could have an important domestic benefit—a better-functioning domestic bond market. It also should help stabilize foreign US dollar markets and support foreign economic conditions, which could benefit the US economy through many channels, including confidence and trade. 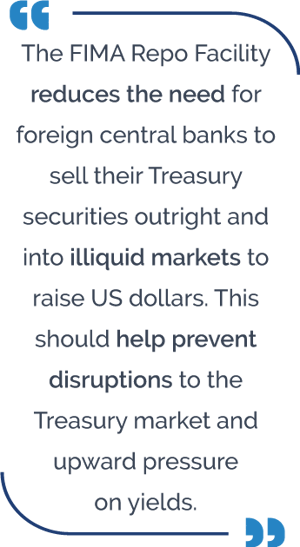 In current circumstances, foreign central banks have been selling Treasurys to meet a rush for US dollars, which has disrupted the bond market. The FIMA Repo Facility is the Fed’s solution to this problem. It allows the Fed to lend US dollars to foreign central banks, thus relieving the shortage of US dollars and helping to stabilize global financial markets.

The FIMA Repo Facility reduces the need for foreign central banks to sell their Treasury securities outright and into illiquid markets to raise US dollars. This should help prevent disruptions to the Treasury market and upward pressure on yields.

This new facility is also positive for emerging market economies, whose central banks will have easier access to US dollar liquidity to help relieve strains in their own bond markets and banks.

By easing the run for the US dollar, these Fed facilities should relieve some of the upward pressure on the US dollar.

The FIMA Repo Facility would allow foreign central banks to temporarily raise dollars by selling US Treasurys to the Fed and agreeing to buy them back at the maturity of the repurchase agreement. The term of the agreement will be overnight, but can be rolled over as needed.

The transaction would be conducted at an interest rate of 25 basis points over the interest rate on excess reserves (currently at 0.10%), which generally exceeds private repo rates when the Treasury market is functioning well. As a result, the facility would primarily be used only in unusual circumstances.

All operations in this new facility will be reported in the Fed's weekly reserves statement.