Five Reasons Why China is Unlikely to Devalue the Renminbi

For years, President Trump has accused China of purposely devaluing the renminbi to boost exports. With trade and political tensions boiling over, the question of whether China will devalue the renminbi often comes up. We don’t think China will intentionally weaken the renminbi to counteract US tariffs. Yes, it weakened about 2.5% versus the US dollar in May when trade tensions resurfaced, but the weakness was largely market-driven. Chinese authorities have, in fact, leaned hard against renminbi depreciation through verbal intervention and tightening capital controls on residents. Evidence also suggests Chinese authorities have unofficially redeployed the counter-cyclical adjustment factor to fix the renminbi at stronger levels.[i] 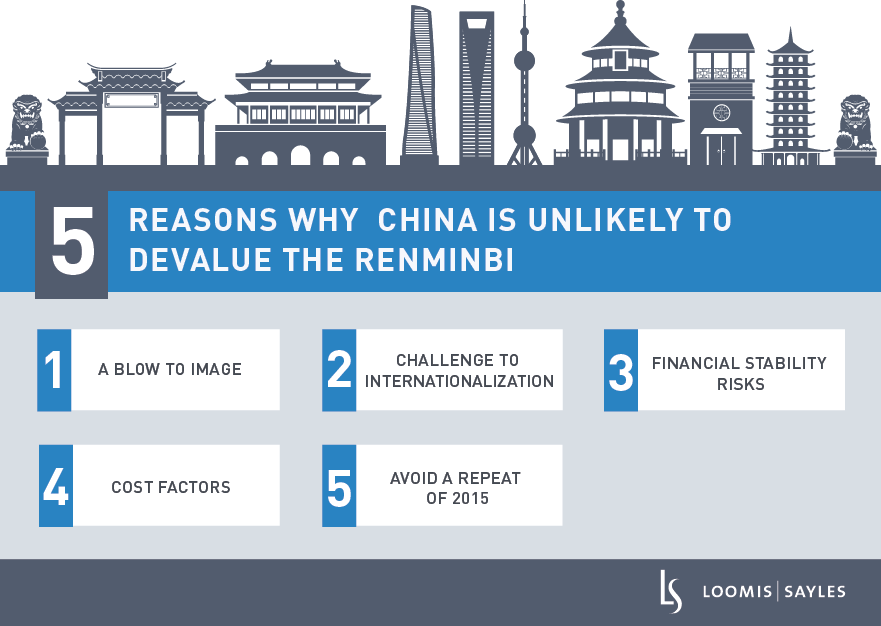 Big picture, the costs of a weaker currency can outweigh the benefits for China. Here are five reasons why:

[i] The renminbi remains a managed currency. The People’s Bank of China fixes the US dollar-Chinese yuan (USDCNY) central parity rate based on: 1) the previous day’s close, and; 2) movements of the US dollar against a basket of currencies. The USDCNY rate is only allowed to fluctuate within +/- 2% of the central parity rate. Estimated model errors have been showing up persistently and meaningfully negative, suggesting that the People’s Bank of China has been fixing the USDCNY rate at levels weaker than implied by this formula (i.e., a stronger renminbi).