On August 5, 2019, the US dollar-Chinese yuan (USDCNY) exchange rate broke above 7.0 yuan to the dollar, an important threshold for many market watchers. Not surprisingly, China and the US had very different takes on the CNY weakness.

The People’s Bank of China (PBOC) affirmed that the move was market-driven, a byproduct of the latest US tariff threats. Meanwhile, the US Treasury designated China a currency manipulator, alleging that China devalued its currency to gain an unfair advantage in international trade.

On August 6, the CNY was weaker still against the US dollar, a move that could be interpreted as more evidence of manipulation. But I disagree. The weaker fix doesn’t necessarily mean China is purposely devaluing its currency. 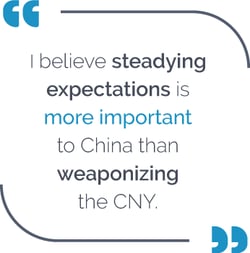 To see why, it’s important to understand how China sets the daily USDCNY fix.

The fix is based on:

The first two factors are used by many CNY observers to estimate a model-implied fix. The CCAF is then added to the model fix to get the actual fix. Data shows that China deployed a massive CCAF on August 6 to combat the currency weakness. In fact, the adjustment was the largest on record since China introduced the CCAF in 2017.

Not calling for a currency war

As I’ve said in the past, I don’t think China is out to start a currency war. China appears to be actively fighting market-driven weakness. In my view, the PBOC isn’t preoccupied with the 7.0 USDCNY level. The central bank’s top priority is to prevent CNY depreciation expectations from getting out of hand. The 7.0 level is not a line in the sand. The real line is uncontrolled CNY depreciation that impinges on financial stability—financial stability is one of the six facets of stability important to Chinese authorities. If expectations for the CNY become unhinged, this could trigger uncontrolled capital flows out of China. I believe steadying expectations is more important to China than weaponizing the CNY.

I think the PBOC’s recent statement on the CNY breaching the 7.0 mark, together with the largest CCAF on record, is a clear indication that China is not using its currency to counter tariffs.  Will these moves be enough to arrest poor sentiment? Time will tell.