Data Consistent with Another US Mini-Cycle

While the longest economic expansion in US history continues, investor skepticism regarding its staying power seems to be rising. In our view, indicators suggest the economy is in the downturn phase of a mini-cycle—a period of slower economic growth but not outright GDP decline. We believe manufacturing activity will pick up and the US economy will emerge from this mini-cycle without a traditional recession.

The issues driving the current mini-cycle include manufacturing weakness, trade conflict, the lagged effect of the Federal Reserve’s 2017-2018 tightening, another inventory cycle, the fading impact of US fiscal stimulus, and euro zone economic weakness.

Escalating trade conflict with China and further US dollar strength could make the situation worse. On the other hand, easier monetary policy from the Fed and other central banks could support the manufacturing sector and help extend the expansion. 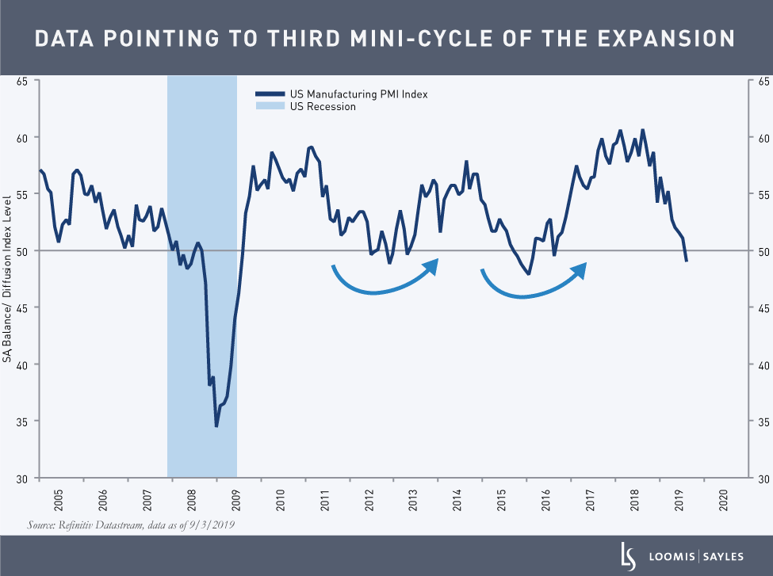 Not the first time

The economy experienced a mini-cycle in 2011 and 2012 fed by the euro zone crisis, the US debt ceiling fight, Standard & Poor’s downgrade of the US credit rating and the fiscal cliff. Real GDP growth was weak for much of 2011 and 2012. The Fed couldn't cut policy rates, which were zero, so it acted with its balance sheet. The Fed started its third round of quantitative easing in September 2012.

In 2015 to 2016 a mini-cycle emerged from the oil price collapse and global economic weakness stemming from China. The Fed hiked once in December 2015, but as economic weakness became more pronounced, the Fed held rates steady for a year.

What we are watching

Looking ahead, we will be watching monthly manufacturing and service sector PMI indicators and initial jobless claims. The surveys should provide timely clues supporting or undermining our mini-cycle outlook.

Weaker PMI readings often coincide with Fed easing cycles. We do not anticipate a full easing cycle to take place this time, but we expect the Fed to cut rates twice more this year. Fed easing should help support a pickup in manufacturing activity later this year and into 2020 as the US avoids recession.

Even with a positive growth outlook, we do not expect credit spreads to revisit the lows seen earlier in the expansion. Of course, a positive shift in sentiment could help spreads narrow from here. Our global earnings outlook is less than robust. Nevertheless, we expect low-single-digit year-over-year earnings growth to support equity market valuations, which are not egregious in our view.