COVID-19 and the Loan Market

I expect to see a combination of anti-viral medications and vaccines develop over 6 to 12 months globally. We are seeing daily positive articles on the effectiveness of anti-virals from other countries. Vaccine development appears to be moving very quickly, and there is potential for a vaccine to get to people as soon as the end of 2020. If people think effective treatments and vaccines are imminent, life could go back to normal, and in this case, that could mean coming out of our protective shells into a world powered by loose monetary and fiscal policy. Historically, markets have tended to anticipate upturns about six months before they occur. As a result, I think markets could start looking better over the very near term if things get particularly good with vaccines and antivirals or, more likely, in about six months as markets anticipate an eventual vaccine about 12 months after development began. It may be hard to believe now, but a year from now we may be talking about when to remove stimulus so the economy does not overheat.

Loans may be closer to “stupid cheap” than overpriced

Unlike the great financial crisis (GFC), which seemed to threaten the end of the financial world, this crisis feels particularly curable. We may have a couple of quarters of down GDP, but the potential rebound should be far closer than in an average recession. That means the current price action in the loan market, at least, is a lot closer to "stupid cheap" than overpriced, in my opinion. Here's why:  bank loans are not about whatever value people feel like putting on them (that's what equities are), they are about being paid back, historically in an average of three years. One way to think of their value is to focus on the odds of each loan being paid back, one by one. Because they are senior and secured by collateral, bank loans tend to trade near par most of the time, because the odds are good that most of them will be paid back. Well guess what—I believe most loans priced in the 80s today will be paid back too. In my view, they're not trading in the 80s because they won't be paid back; in general, they're trading in the 80s because people are scared or are trying to trade in and out of things to maximize their investment return. When people get scared, they often tend to focus less on rational investment prospects and more on feeling better at that moment. This is why a lot of investors sell at the bottom and buy at the top.

Three roads back to par

Why am I saying loans are fundamentally cheap right now? Because there are three roads back to par for loans: 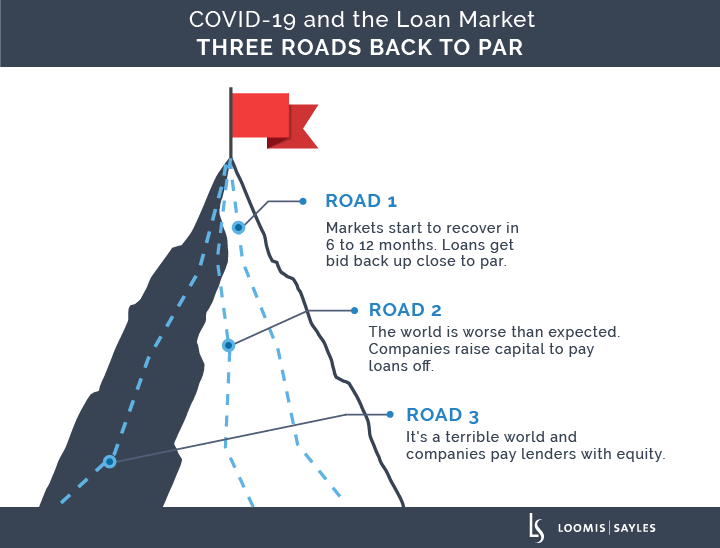 I think loans are in a special place in this world, where we have many paths back to par under many reasonable circumstances. Prices are currently below where I think they should be in a normal recession, and normal recessions typically take a lot longer to resolve than this crisis should. I believe loans are cheap fundamentally, and fundamentals generally come through in the end. Currently, I don't think stocks are cheap fundamentally and they have to contend with all that momentum money sloshing around. High yield is not at recessionary spreads, in my opinion, which might be rational but implies that loans should not be either.

So why are loans trading where they are?

Some loan holders have to sell and some want to sell. The buyers are generally CLOs and opportunistic non-bank-loan funds who typically try to pick off the weak hands. They are trying to test how low people will sell to them. If the selling pressure stops, I expect a lot of bids will rise very quickly. We saw that in 2016 and we saw it in 2019. Selling to bottom-feeders can lead to some painful quotes, which could hit net asset value (NAV) and index levels, but I don’t think it’s indicative of where most holders would be willing to sell. That is another way of saying that buying a fund at the marked NAV could get you loans cheaper than if you actually tried to buy those loans one by one in the market. We mark our portfolios at the bid, not at the offer, and the offer in many cases is three or four price points higher and not much may be offered there anyway.

Energy: We have long kept our energy bet down to about benchmark weight, and that weight is under 5% of the index. That contrasts with high yield, where energy is a much higher weight. We learned in 2015 that the time to be overweight energy was when there is blood in the streets. That may be now, or soon. Liquidity is job #1 for us now, but energy buys are on our radar. Further, our energy holdings are not exploration and production so much as pipelines and sand providers that should continue to exist as long as the US fracking industry exists. All energy is currently down with low bids, but we are one step removed for the most part from drillers who could be severely impacted in a few months by low prices.

Liquidity: We have been selling to meet outflows, and while it's not fun to sell loans below their fundamental value, it has been doable, even on days when the stock market is crumbling. CLO managers tend to prefer buying loans below par and they are about 70% of the market. They generally don't have to sell and they don't mark to market. So we're getting executions, but I wish all of our investors would pause and realize that this market appears cheap versus where it could be in the not-too-distant future if the virus is solved, which seems very likely.

Companies drawing their lines of credit: One of the things that bank risk managers do in a downturn is look to limit their exposure to line draws. Most CFOs who went through the GFC learned that lesson, so some companies have been drawing on their lines to eliminate the ability of banks to cut their lines. Given my outlook on the virus, the practical effect of this is for those companies to pay more interest for a few months for peace of mind and to reduce the chance of bankruptcy, while giving the banks more income. I don't see this trend as being a harbinger of anything else, and I don't see the Federal Reserve allowing banks to have a hard time funding their commitments.

Fed policy and lower rates: I think we have to look back at the end of the GFC to understand this part of things. When Fed funds are low, LIBOR floors become ubiquitous on new issues and when companies need covenant waivers. About 35% of loans still have floors, averaging about 96 basis points for our loans, and I expect that proportion to increase as long as Fed funds are low. Meanwhile, loans at a discount tend to close that discount, as we saw coming out of the GFC. So companies will get to see their interest payments decline as they reset their contracts over the next three months, but total return should be much better than average if the virus crisis passes. Once we’re on the other side, Fed policy should get tighter and interest payments should start rising again.

Other Fed actions: The Fed is bringing its whole GFC playbook into play very quickly, since it worked out well last time. Our Treasury traders have reported massive bid/ask spreads in intermediate and long Treasurys in the last couple of weeks, and the commercial paper market needs support, but I don't doubt the Fed's ability to keep greasing the wheels of the banking system. I think the GFC was scarier than this is. The Fed can't cure the virus, but it can keep the gears going while doctors and scientists do their thing.

Comparisons vs. high yield: The bank loan and high yield markets have gone down together. Yields to a three-year maturity may favor loans at this point. High yield has significantly more energy exposure, so if their index yield is not much better than the loan yield, that implies their non-energy bonds might be tight to average loans. But markets are moving around so much, these comparisons could change in a day or two. Bigger picture, if you want to make a bull call then you might buy equities. If you want to be cautious but feel that you'll get a good potential yield and a gravitation to par, then loans may make more sense. High yield is somewhere between those calls because some bonds could get wiped out in a default wave, but in a rebound you could do better than loans on interest income and maybe a tightening spread. In our strategies, we would expect to go from our low levels of high yield to something a bit higher if we see redemptions stop, so we may get some benefit from that possibility.

Portfolio positioning: We're focused on job #1, which is liquidity. We have been gradually improving our quality since the third quarter of 2018, when the market allows. I imagine after this is done, we may resume that trend, although if we think the virus recession counts as the only recession for the next few years we might start to go the other way. That is to be determined. Meanwhile, if we get the chance, we'd love to be buyers of dislocated individual loans, and probably some cheap energy bonds if they are actually offered. In terms of how things have traded so far, higher-quality loans have actually come down farther because they are the easiest to sell and started at a higher price.