Brexit: The Key Ingredients and What Could Go Wrong

There has been a lot of drama as the UK approaches the expiration of Article 50 (Brexit) in March 2019. We’ve seen political posturing and UK Prime Minister Theresa May’s leadership called into question. The situation remains highly fluid, and there are many potential paths to Brexit. But no matter the path, it’s important to remember there are three key ingredients needed for Brexit—a withdrawal agreement, a transition period and a new permanent trade relationship. Each one is detailed below. Managing Brexit requires all the ingredients come together, otherwise the soufflé will fall flat. 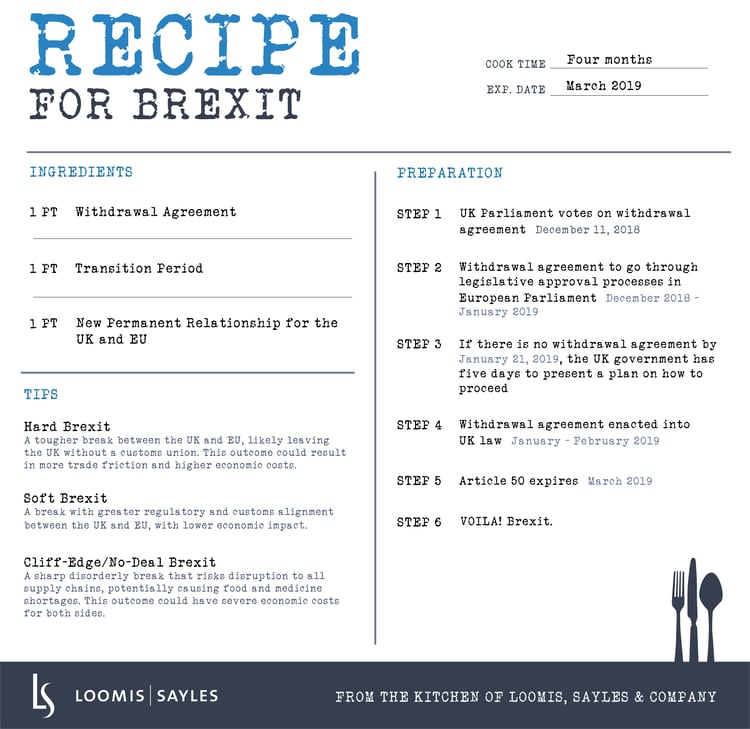 The components of each ingredient

This agreement states the divorce terms between the UK and the EU, including guarantees for EU and UK citizens living in the other territory, UK financial commitments to the EU budget during transition, and the thorny issue of avoiding a hard border between northern Ireland and the Republic of Ireland. On November 25, the EU approved the agreement, which will now go to European Parliament for approval. The trickiest approval, though, is in the UK, where the deal will be put to UK Parliament on December 11. A failed vote opens many paths, including a second vote, a change in leadership, or perhaps a general election.

Not much changes during the transition period, while a new relationship between the UK and EU is negotiated. Both sides agreed on the easiest elements last spring. During transition, the UK will remain a member of the EU single market and customs union. While the UK initially hoped for a longer transition, negotiations resulted in a 21-month transition between the expiration of Article 50 and the end of December 2020. More recently, however, both parties have started discussing extending the transition period.

This will be a super-sized agreement establishing terms on absolutely everything between the two sides, notably security and trade relations. The UK and EU haven’t tackled this thorny issue beyond a brief, non-binding and bland political declaration. In theory, this agreement must be done by the end of transition in 2020. However, the complexity of the agreement and historical evidence of trade negotiations suggests this negotiation could be extended at least once, and possibly by several years. Thus, the UK could still be half in/ half out of the EU into the mid-2020s.

What if something goes wrong?

Political instability within the UK has plagued Brexit negotiations at every step since the June 2016 Brexit vote. Several scenarios could disrupt the current withdrawal agreement as it moves through the approval process.

We believe the UK will negotiate an adequate withdrawal agreement before Article 50 expires at the end of March. The small risk of a no-deal or cliff-edge Brexit threatens severe enough economic disruption to both sides that we expect politicians will ultimately prove keen to avoid it.