Are Emerging Market Assets Vulnerable to Another Taper Tantrum?

Real rates in the United States have moved sharply higher since the beginning of 2021. The move has many wondering if emerging market (EM) assets are vulnerable to a repeat of the 2013 “taper tantrum.” EM investments were one of the worst casualties of the taper tantrum, and unlike other risk assets, they took a long time to recover from the initial selloff. While emerging markets remain highly sensitive to global financial conditions, we see five important distinctions that, in aggregate, suggest EM assets are in a stronger position today.

1. The cyclical position of EM economies today is entirely different.

Even prior to the COVID-19 pandemic, growth and inflation were broadly subdued. Growth stood below measures of potential output in countries such as Brazil, Mexico and South Africa, and inflation pressures were limited, with central banks generally achieving inflation targets. By contrast, in 2013, several EM economies were displaying classic signs of overheating—positive output gaps,[i] above-target inflation and excess credit growth.

2. External positions have improved. The average EM current account balance[ii] has shifted from deficit to surplus since 2013.

Several EM countries currently have record trade surpluses. While part of the improvement may be related to the pandemic and transitory, we believe fundamental external vulnerability is lower. 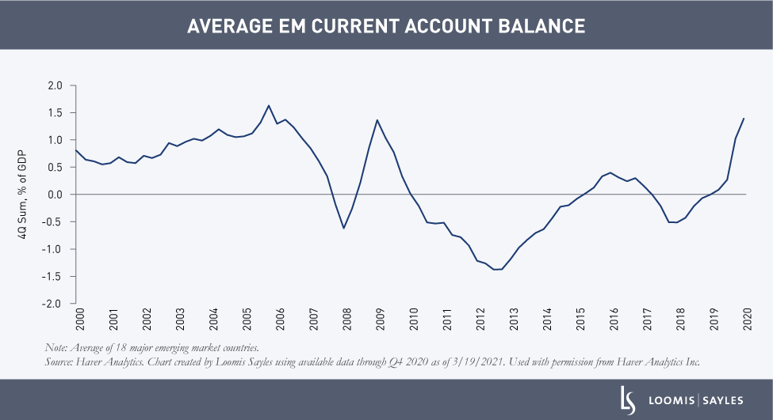 An index of EM real effective exchange rates ex-China stands 7% below its long-run average, compared to 7% above in May 2013. We view undervaluation as a buffer against further EM currency weakness. 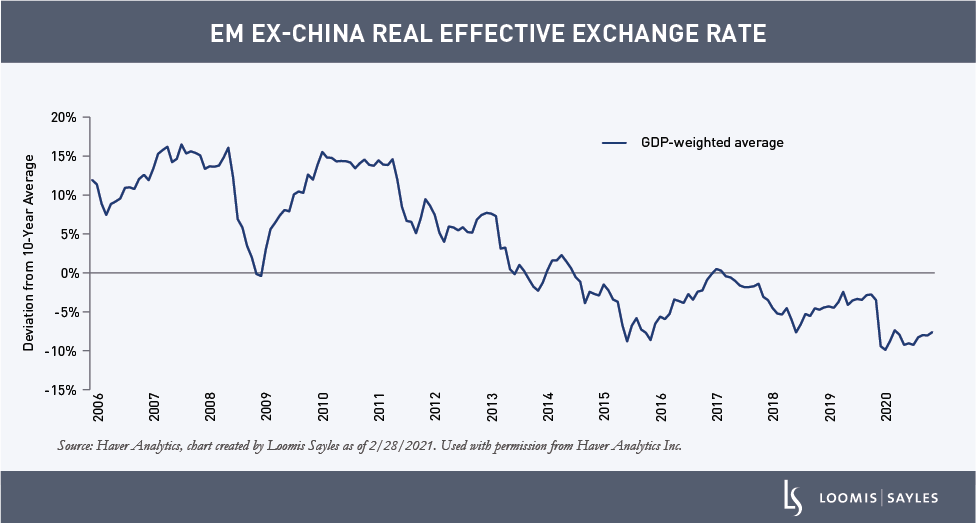 4. Foreign positioning in EM local bond markets is lighter versus 2013.

The shift was driven by efforts to deepen local bond markets and, in recent years, foreign outflows related to credit rating downgrades. Then the pandemic shock drove a wave of outflows in 2020. While some markets have stabilized, others are still seeing outflows. 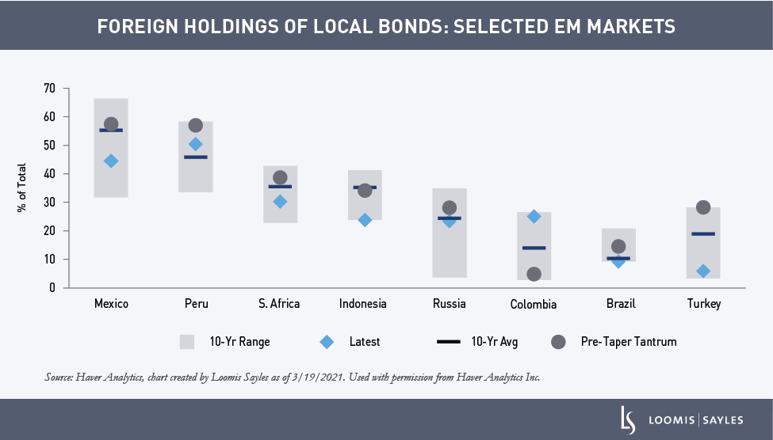 5. On the other hand, EM fiscal positions have largely deteriorated since 2013, a function of declining growth, sticky budget deficits and, more recently, pandemic relief spending.

We expect the ability to deliver on fiscal consolidation plans and restore fiscal sustainability post-pandemic will be a key driver of EM asset performance.

On balance, we believe the current backdrop is supportive for EM assets. High commodity prices, improved external balances, rebounding global growth, and lighter foreign positioning are typically favorable conditions for the asset class. For this to be a value trap, we believe US inflation would have to surge in tandem with a return to full employment by early 2022, causing yields to spike and forcing the Federal Reserve to pull its rate hike expectations forward. We think that scenario is unlikely. Loomis Sayles’ Macro Strategies Team thinks lingering slack in the US and global economies should help keep inflation under control, allowing a more gradual increase in US yields going forward. We see value in EM assets and potential opportunity after the recent adjustment in markets.

Investment recommendations may be inconsistent with these opinions. There is no assurance that developments will transpire as forecasted and actual results will be different. Information, including that obtained from outside sources, is believed to be correct, but Loomis Sayles cannot guarantee its accuracy.