In China, pork prices are up 70% (!) year over year. A swine fever outbreak has crippled the pork industry and caused a surge in pork prices. Pork prices are a main driver of China’s Consumer Price Index (CPI) increase. CPI inflation could reach 4% by year-end, one percentage point above the People’s Bank of China’s 3% target. However, stripping out food prices shows that inflation is on the downtrend (and was just 1%), which appears more in line with the weak state of China’s economy. 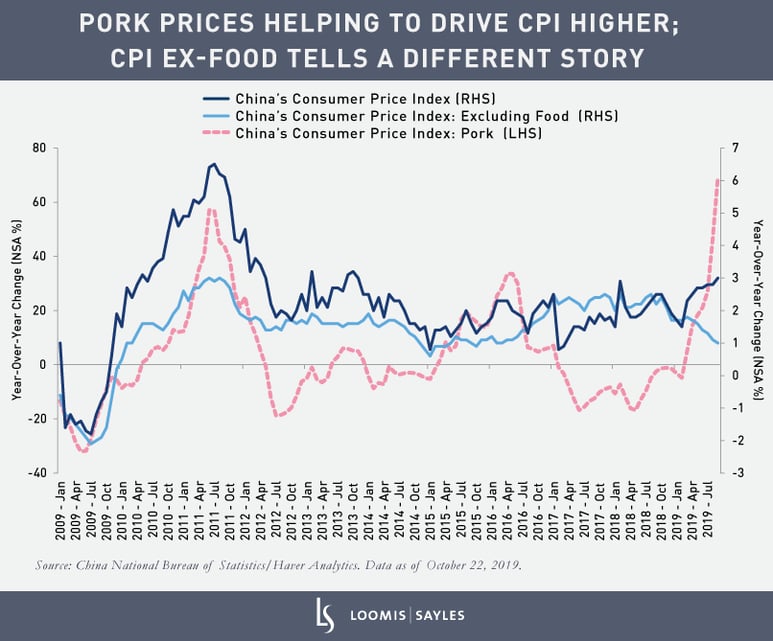 China’s policymakers appear reluctant to ease monetary policy meaningfully in spite of lackluster growth — nominal growth slowed to 7.5% year over year in the third quarter of this year, from above 9.0% at the end of the fourth quarter of 2018. Another key price indicator, the Producer Price Index (PPI), is indicating deflation. PPI deflation has negative implications for nominal growth, profits and debt service.

Yet, the PBOC appears focused on CPI inflation, even with the distortion from pork prices. The focus on CPI could be an excuse to argue against easier monetary policy. I see two reasons behind this approach:

I think more easing of monetary policy is required in China. To the extent the first reason is true, the recent strengthening of the renminbi, if sustained, could give authorities the space they need to ease monetary policy further.