Recently, municipal bond defaults have been rising. Compared to last year’s totals, municipal bond defaults have increased 16.5% year to date, while the level of ‘distressed’ issuers has more than doubled.[i] State and local governments are under severe fiscal pressure, and after last week’s election, the prospects of a large fiscal aid package look dim. Yet municipal bond mutual funds have seen positive inflows for 26 consecutive weeks, more than offsetting the wave of redemptions that took place at the height of the panic. This incongruence may suggest the municipal market is behaving irrationally, but we don’t think that’s the case. Here’s why. 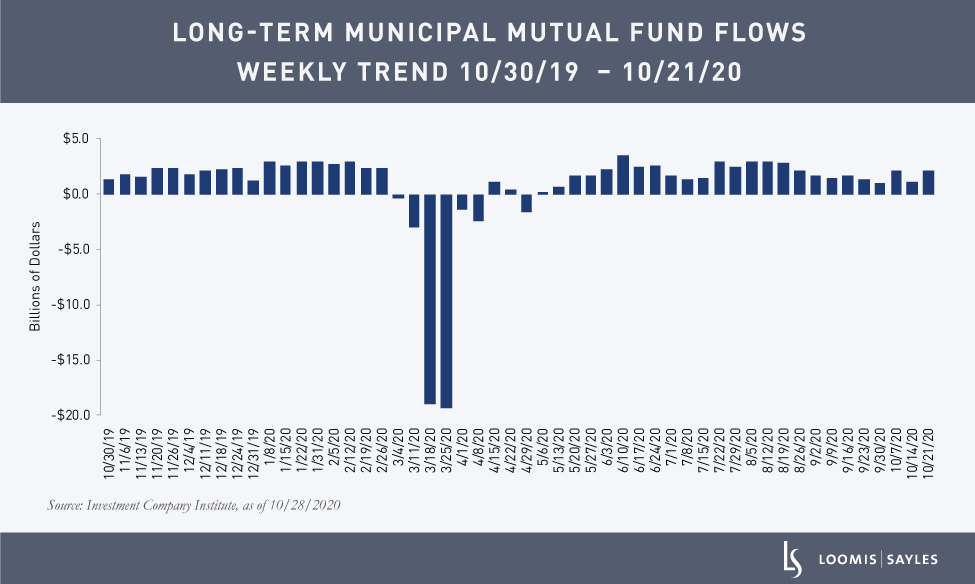 Defaults may be rising, but they’re still low

First, let’s put the municipal default rate into context. Defaults in the state and local market historically have been very low, both in absolute terms and compared to similarly rated corporate bonds.

Defaults have been relatively contained

So far, rising defaults have not been widespread across the muni market. Defaults have been concentrated in high yield and non-rated issuers in smaller segments of the market and, to date, no defaults have occurred among investment grade issuers. For context, the high yield municipal market is less than 10% of the size of the investment grade market. More than a third of the par value of defaults comes from senior living centers, which were suddenly and severely hit by COVID-19. Providers have struggled with increased costs and a significantly more difficult environment for accepting and attracting new residents. As utilization and cash from operations decline, some weaker issuers have quickly found themselves unable to service their debt. In addition, for-profit providers have proliferated in some communities in recent years, resulting in excess capacity that further strains existing providers. Another third of payment defaults in 2020 come from the area of development finance, including a hotel convention center, a biofuel facility, and a rice-to-fiberboard conversion plant. We expect defaults to worsen over the near term. Looking at issuers currently distressed but not yet in payment default (i.e. covenant violations), senior living centers again lead the ranks and are similarly joined by development finance projects supporting hotels, charter schools and recycling plants, among other projects.

The municipal bond market may be behaving rationally right now, but we expect to see higher volatility in the coming months. While the ultimate consequences of the federal election are yet unclear, directionally we would expect less fiscal aid for state and local governments and diminished odds of changes in marginal tax rates. In these challenging times, we do not think the risk of default is safely ring-fenced in the high yield market. Major sectors of the state and local markets are facing extreme fiscal challenges. Mass transit, airports, schools, healthcare providers and even state and local governments themselves could eventually be forced to choose between eliminating basic services or paying debt service.

In this environment, we believe municipal investors should focus on credit selection, seeking issuers with a wide stream of revenue sources and strong balance sheets. Low default rates should not lull market participants into complacency. It is worth remembering that the Commonwealth of Puerto Rico went from investment grade to default on $72B of debt in less than 12 months.