What the Yield Curve Is Saying About Monetary Policy

Is a regime shift in monetary policy imminent? One might think so looking at the yield curve flattening trend—the 5-year and 30-year Treasury yield spread has narrowed 75 basis points (bps) since September 2017 and appears to be on track to flatten entirely.

From my vantage point on the trading desk, it seems investors are beginning to believe that the Federal Reserve (Fed) has become comfortable with shifting from an accommodative policy stance to a restrictive policy stance much sooner than previously expected.

We assess the Fed's monetary policy stance by observing the difference between the Fed's nominal policy rate, which is currently at about 1.7%, and a measure of the neutral nominal rate (the estimated neutral real rate,[i] or r-star, plus the Fed's 2% inflation target). While there are varying opinions and a great deal of uncertainty regarding the level of r-star, the most commonly cited models suggest that the r-star is currently somewhere between 0% and 0.50%, which implies a current neutral nominal policy rate of between 2% and 2.5%. 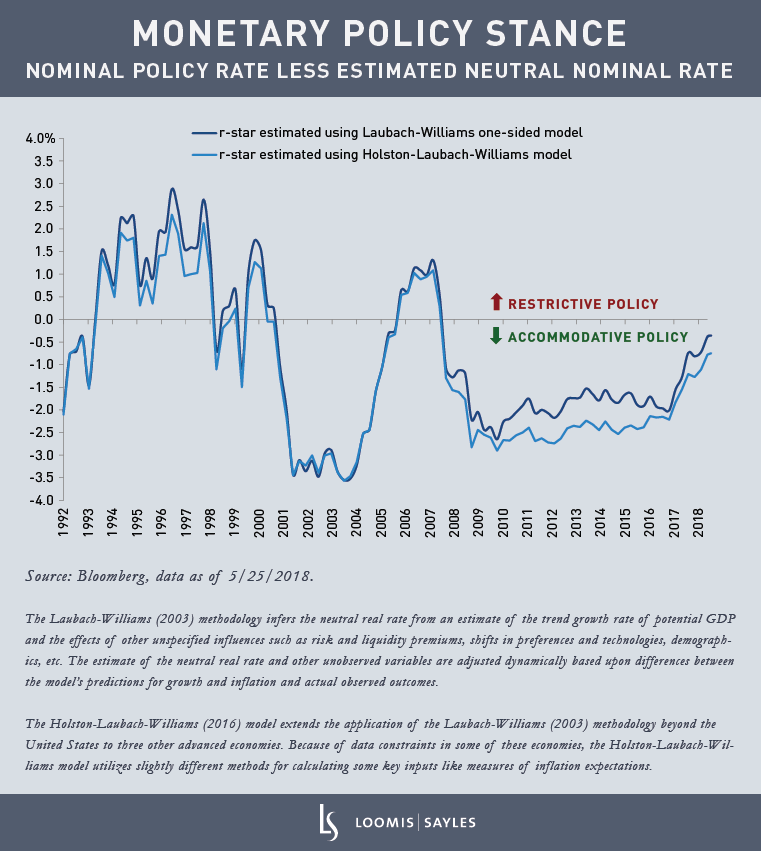 Tightening with a new purpose

The Fed is continuing to signal—and the market is continuing to price in—only a continued gradual pace of interest rate hikes. Little has changed on this front. What seems to have changed, though, is expectations regarding the evolution of the neutral rate and the Fed’s reaction function vis-à-vis that neutral rate. It wasn't long ago that Fed communications stated that gradual hikes would be warranted in order to match the expected gradual increase in the neutral rate; gradual hikes would be necessary in order to maintain a relatively stable policy stance. Now, however, the message appears to be much different. Recent Fed communications indicate that the Fed seems to have become resigned to accepting a low and stable neutral rate in the near term. Nonetheless they continue to signal “further gradual” interest rate hikes. This implies a proper tightening of monetary policy. Accordingly, Fed speakers have begun to increasingly describe monetary policy as becoming “restrictive” or a “restraining factor.” While the market knew this day would eventually come, it previously seemed a bit more distant.

In my opinion, nothing matters more for the shape of the yield curve than the relative stance of monetary policy. In observing prior monetary policy tightening cycles we can see that, historically, broad segments of the Treasury yield curve tend to become near perfectly flat shortly after the Fed policy stance transitions into restrictive territory. The price action in the Treasury market today suggests that investors have been pulling forward their expected timing of this transition in the current cycle.

[i]  The estimated neutral real rate of interest is commonly defined as the real interest rate consistent with output equaling potential and stable inflation. The natural rate is an unobservable variable; it must be extracted from data using statistical methods.