Treasury Liquidity on the Rebound

By Michael Gladchun, Director of US Rates Trading

It’s amazing what you can achieve with a budget of $75 billion per day.

Since mid-March, the Federal Reserve has worked relentlessly to unfreeze Treasury markets. The results of its asset purchases are starting to show. Treasury liquidity—one of the most unusual and troubling pain points of this liquidity crisis—has vastly improved since quantitative easing (QE) started.

Of course, the market is still a far cry from where it was a month ago. But I’m not looking for a full recovery. Back then, market liquidity was on steroids. Transactions were essentially costless for on-the-run Treasury securities while basis trades, which try to capitalize on pricing differences between Treasury bonds and Treasury futures, were being priced out to the fifth decimal on yield. That was a pretty mind-boggling experience in its own right. Low volatility and de minimis transaction costs contributed to the buildup of excessive leverage in certain positions that precipitated this liquidity crisis. So, while I expect this recovery in liquidity to continue, I’m not pulling for a full recovery. I think some level of friction contributes to long-run market stability.

The Fed’s next steps

Monetary accommodation via quantitative easing works in two major ways: flow effect and stock effect. Traditionally, QE has impacted asset prices primarily through the stock effect, whereby the market reprices assets by accounting for the cumulative effect of all purchases the central bank has signaled. The actual purchases as they occur (the “flow”) have tended to have very little impact on prices. 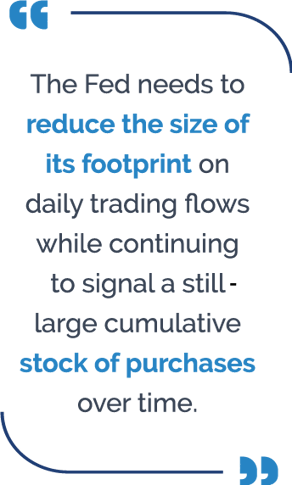 This latest iteration of QE was different. The Fed’s goal was to improve market functioning by immediately removing from the market the less-liquid Treasury securities that had suddenly clogged up balance sheets. Here, the flow was what really mattered, and the Fed went big with a shock and awe campaign of massive daily purchases. These purchases have actually had a material impact on intra-day pricing. Now that market functioning is moving in the right direction, this is no longer what’s needed. The Fed needs to reduce the size of its footprint on daily trading flows while continuing to signal a still-large cumulative stock of purchases over time.

This appears to be the Fed's plan. The $75 billion daily pace of purchases will remain in place through Wednesday, April 1. Then the daily pace winds down to $60 billion per day for April 2 and 3. Presumably, the pace beyond then will be at that level or lower (weekly scheduling now seems to be the practice). We believe this gradual step-down is good for market functioning. Liquidity can only be truly restored once the market finds a clearing level without massive daily intervention.

Risks at the long end

The biggest risk I see here is that the market may drive the 30-year Treasury yield higher once the Fed pulls away. I have seen little signs of support for 30-year Treasurys outside of the Fed’s daily purchase operations. Ultimately, however, the fate of the 30-year bond yield may lie in the plans for financing this deficit expansion. Traditionally, emergency expansions have been funded with short-dated debt. That would be a welcomed development, but it is not at all certain. The market reacted strongly a couple of weeks ago when Treasury Secretary Mnuchin mentioned a potential surge in long-end issuance to fund the stimulus package (including the possibility of new 25- and 50-year bonds).