Global Banks – Who Is Swimming Naked? 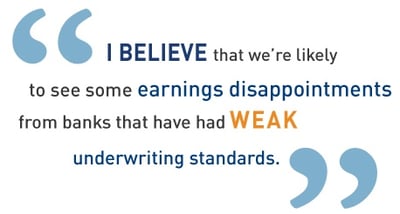 The outlook for most large banks around the world remains favorable, and one reason is that many global banks have been reporting unusually low non-performing loan disposal costs for a couple of years. Why? A financial crisis, like the one we had in 2008, is often followed by a period of low loan growth.

But there are some early warning signs of trouble brewing out there. Here are a few:

Banks most at risk are those with a history of high loan growth and high exposure to commodities or energy. Standard Chartered has both. Loans grew rapidly (17% per year) between 2004 and mid-2014 when they slammed on the brakes. Commodities exposure is high at 9%. The new CEO recently warned, “We grew aggressively in certain markets, we accepted high concentrations by industry, by geography and by individual borrower, and we have found some weak operational controls which exposed the group to losses and fraud.” [i] Oops.

After largely avoiding the last two global downturns (2003 and 2009), Asian banks look more vulnerable now. Banks in commodity-exporting countries look relatively weak—credit quality has deteriorated in markets like Indonesia and Malaysia. Bank Negara, one of the more troubled Indonesian banks, had declining revenue and a quarterly loss in Q2 as it undertook a “conservative” clean up of some non-performing loans.

But Asian banks are starting from a position of high profitability and strong capital, so credit deterioration is an earnings problem, not a capital problem. Loan growth has already slowed—it’s now running at 10% or less across most of the region (except China which is at 15%), according to media coverage of data from the central banks. So far, I see no signs of the financial markets contagion we witnessed in the Asian crisis of 1997-1998.

US banks have low exposure to the mining and oil industries—larger US banks typically have 2-3% exposure. Texas-based Comerica has more, with energy representing 7% of its loans at mid-year. Comerica’s criticized (i.e. lower quality) loans[ii] rose 25% in the first six months of 2015, to nearly 5% of total loans. Still, non-performing loan disposal costs were only 0.2% of loans in Q2, less than half the long-term average.

These banks have surprisingly low exposure to energy companies, given that both are big energy producers. Mining and energy are typically only 3% of their lending. Australia and New Zealand Banking Group may be more at risk, since it pursued an "Asian growth" strategy for over a decade. Asian corporate lending is now 15% of the bank’s total loan book, and it is the fourth-largest international corporate bank in the region after Citigroup, HSBC and Standard Chartered.[iii]

Warren Buffett said "It's only when the tide goes out that you learn who's been swimming naked." I don’t totally understand this. People don’t get washed up on the beach at low tide, only jellyfish. But I believe that we’re likely to see some earnings disappointments from banks that have had weak underwriting standards.

In the current environment of slow global growth and stress in emerging markets, I favor large, well-capitalized retail banks that have cost-cutting opportunities. Some higher-risk banks are starting to look cheap, but I’m happy to wait it out for bigger bargain potential in the future.

Examples are provided to illustrate investment process.  They have not been selected based on performance and the reader should not assume that an investment in any securities was or will be profitable.  The examples should not be considered specific investment recommendations or representative of investments made by Loomis Sayles.