Don’t Give Up on Bank Stocks Just Yet

US bank shares are in a bear market.[i] The KBW Bank Index[ii] fell 20% in 2018. That’s much worse than the overall stock market, which fell 6% in the same period. Ten years after the global financial crisis of 2007-2008, many investors are worried that this economic upturn can’t last much longer. Anxiety about the risk of a recession is high.

Bank share prices generally track bank earnings expectations over time. A sharp fall in bank shares can be a sign of an impending collapse in bank profits, as we saw early in the global financial crisis. On the other hand, a fall in bank stocks is not always a dire signal. For example, during the 2011 euro zone crisis and the 2015 energy market downturn, the pressure on bank earnings turned out to be modest and short-lived, and bank stocks rebounded. Which is it this time? 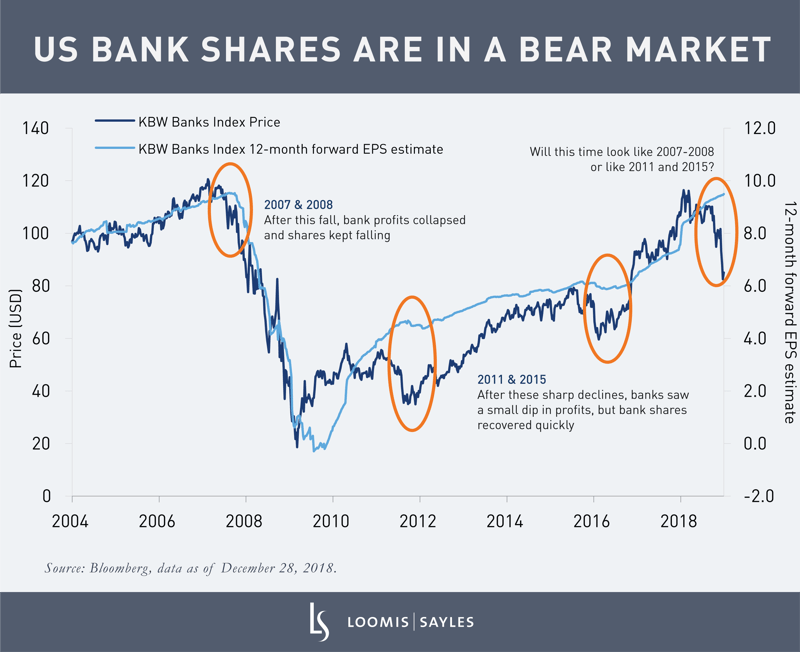 There is plenty to worry about, from a trade war with China to the Federal Reserve raising interest rates too far. As the old saying goes, bull markets don’t die of old age, they are murdered by the Fed. The earnings outlook for US banks has worsened. Loan growth has been disappointingly slow, and net interest margin expansion is decelerating as we approach the end of the Fed’s tightening cycle. Deposit rate competition is picking up between banks. Private equity and other non-banks are competing with banks to lend to companies. Large banks’ revenue from securities trading likely slowed in late 2018 as markets fell.

The case for recovery

All this may sound like warning bells, but there’s good reason to hang in there. The US economy has lost some momentum as the stimulus effect from tax cuts has waned, but it’s unlikely to tip into recession in 2019. I’m not frightened of the big bad bear market for bank shares, even if it sometimes feels like I’m the only one. I think the combined impact of the headwinds above will remain relatively modest. I still expect most large banks can achieve moderate earnings growth this year. Revenue growth is likely to be slow, but banks are controlling their operating costs well and credit costs should stay low. Large banks have continued to return most of their profits to shareholders through dividends and buybacks. The major risk to bank profitability is if borrowers’ ability to repay bank loans deteriorates, but there’s little sign of that happening so far. As long as US economic growth stays positive, I expect this bear market to be short-lived and bank stocks to recover.

[ii] The KBW Bank Index is designed to track the performance of the leading banks and thrifts that are publicly-traded in the US. The index includes 24 banking stocks representing the large US national money centers, regional banks and thrift institutions.