On December 17, the Central Bank of Russia (CBR) announced steps to stabilize the banking system in an attempt to address concerns that the corporate sector will not be able to meet their FX debt obligations. This news combined with slightly higher asset and oil prices seems to have helped to stem the panic. Although the details of the plan still need to be worked out, it is a constructive step that suggests the CBR appears to be serious about addressing these concerns.

The CBR’s new measures include:

The CBR announcement suggests that the central bank and government are willing to support the system so that corporates can meet their short term FX funding requirements. This is not to say that some corporations won’t run into difficulties. However, the environment has improved from the last crisis in 2008 and this announcement provides even further support.

The chart below outlines the external debt due this month and for 2015. It is important to note that December is a peak month for external debt principal and interest repayments, and repayments in 2015 are sizeable. 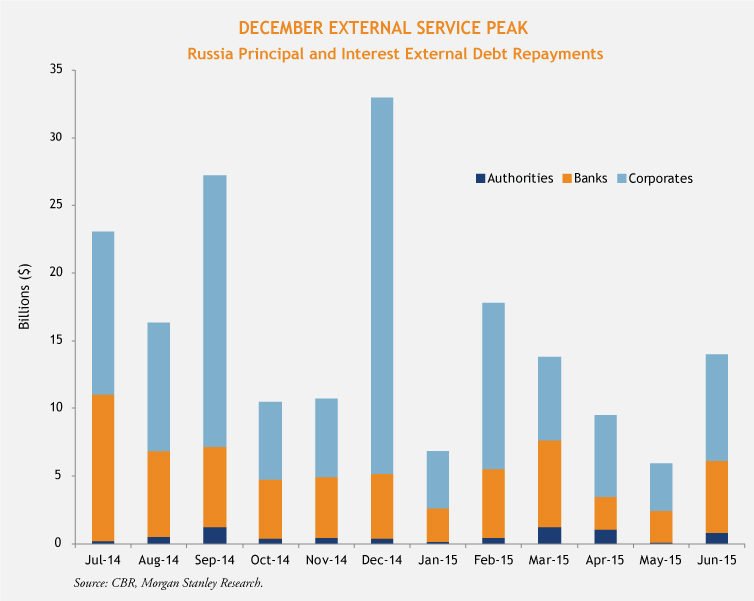 Russian corporations are better positioned now to weather difficulties than during the global financial crisis of 2008. Corporates now typically hold more FX/cash than in prior periods of distress and have broadened and extended the maturity profile of their debt.

Against the roughly $105 billion in corporate debt maturities existing now in 2015, Russian corporates hold approximately $75 billion in FX. Combining FX and cash flow, we believe many of the corporates can cover well over one year of FX debt repayments.

In addition, Standard & Poor’s estimates 82% of Russian corporations have adequate liquidity for the short-term.